Steve Haddadin Gets the Star Treatment!

Mr. Haddadin's hard work and focus have paid incredible dividends for him

YORBA LINDA, CA, June 08, 2022 /24-7PressRelease/ -- Steve Haddadin has participated in The Star Treatment, a prestigious video series hosted by renowned lawyer and television personality, Star Jones. This premier video series is extremely limited — Marquis Who's Who qualifies select listees on an annual basis. Backed by a storied career in media that spans more than two decades, Star works closely with Marquis listees to assist with networking goals and commemorative efforts that can be shared with a worldwide audience.

As the founder and president of King Real Estate Group, Steve Haddadin is one of the youngest in the real estate industry to have gained the certified commercial investment member credential (CCIM), a highly coveted credential in the real estate industry. When he was a young boy, his father was driving around a neighborhood and was telling him about the real estate industry, and proposed an idea that when he turned 18, he should earn a real estate license, as many who have entered that field had been able to reap financial rewards. Mr. Haddadin went above and beyond his father's recommendation, earning his CCIM credential, which speaks to his expertise. In his words, "it tells a buyer, an investor or an agent on the other side that whoever you're working with is an expert. He or she has been through rigorous education. Once you have it, you set yourself apart from the rest of the industry – only eight or nine percent of the industry has this credential, and it takes years to get it."

Once he did earn the credential, however, Mr. Haddadin refused to sit on his laurels. Rather, he continued attending seminars and educating himself in order to better himself and build upon his already impressive body of knowledge. This knowledge base allows him to take a hands-on approach with clients that helps ensure continuous customer satisfaction. This is essential, because King Real Estate Group does not churn through clients to prioritize profit through volume. Rather, staff members take a more bespoke approach, working with individual clients to foster long-lasting and productive relationships. Ultimately, this leaves a good impression with the people working with King Real Estate Group.

Although he has made great progress in terms of fulfilling his career goals, Mr. Haddadin is aware that no man is an island, and every person's success is built on the support they receive early on. For his part, Mr. Haddadin credits Mark Stark, who was a great mentor for him at Berkshire Hathaway when he started out. Mr. Haddadin pointed out that a good mentor is someone who has tried everything that their mentee is attempting to accomplish for themselves. They're aware of the potential pitfalls and can advise in order to prevent them. That's exactly what Stark did for him in the early days, and it's what Mr. Haddadin hopes to pay forward to the next generation.

Overall, the most important thing Mr. Haddadin wants to impart is that "whether you're trying to get into my industry or any other industry, things take time. It might happen sooner than you expect, or it might take a little bit longer, but at the end of the day, things work out for those who remain committed, who stay the course. If you feel things are not working out right now, I hope this interview sheds a light on you, and I hope that this allows you to stay at what you're doing." With a passionate heart and a focused mind, Mr. Haddadin was a great feature on this past episode of the Star Treatment. 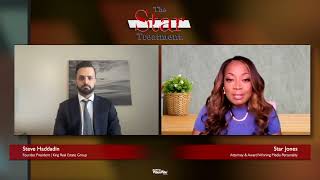