As an OB-GYN, Dr. Lohr prides himself on the expert care and attention he provides to each patient.

He is a recipient of the Order of the Long Leaf Pine Award, the highest civilian award given in North Carolina by the governor of the state, in 2021.

LEXINGTON, NC, August 11, 2022 /24-7PressRelease/ -- Lloyd D. Lohr, MD, FACOG has been included in Marquis Who's Who. As in all Marquis Who's Who biographical volumes, individuals profiled are selected on the basis of current reference value. Factors such as position, noteworthy accomplishments, visibility, and prominence in a field are all taken into account during the selection process.

As an OB-GYN with Women's Center of Lexington, Dr. Lloyd D. Lohr prides himself on the expert care and attention he provides to each patient. Growing up on the family farm, Dr. Lohr would take inspiration from his father, Dermot, who was a physician. Watching him made him believe that medicine was the path for him, even at an early age. As a child, his father's brother stayed on the farm with his grandfather and began working with him when he was 13 years old. He continued to work as a plumber until college and the start of medical school. When the time came to choose a specialty, Dr. Lohr chose OB-GYN because it offered a mix of short-term patients, long-term patients, surgery, medicine and psychiatry.

Dr. Lohr would like to convey that establishing a good a relationship with the patients is very important. He also believes that the medical practice nowadays is very different from what he practiced when he started out, in terms of standard practices carried out by medical practitioners, as well as the evolving rules and regulations that have set new standards in healthcare. Dr. Lohr's most notable achievement was his involvement and work on the female urinary incontinence because it changed the lives of many women.

To remain connected to other industry professionals, Dr. Lohr has been affiliated with a number of professional organizations, including the Davidson County Medical Society, the Southern Medical Association, the Robert A. Walsh OB/GYN Society, the Nathan A. Womack Surgical Society and the American College of Obstetricians and Gynecologists. He also prides himself on giving back to others through such worthy causes as Kiwanis Club, and a local children's camp.

Family is a cornerstone of Dr. Lohr's success. In particular, he would like to mention Dr. Jacob Lohr who is a pediatrician living in Charlotte, North Carolina with his brother. He acquired family land when he arrived in Lexington and established "Granny's Farm." There, he raised and rode horses, raised cattle and grew hay, corn, and soy beans. He retired in September of 2020 after practicing OB/GYN for 50 years in the clinic he established in Lexington, North Carolina in 1970. Dr. Simon Harris, his cousin, joined his clinic in 1974. His wife, Patricia, was a nurse and they've been married for 29 years. Meredith is his adopted daughter and she has two children. Aside from his own family, Dr. Lohr has delivered four generations of children to another family.

Speaking to his hard work and dedication, Dr. Lohr has earned several best resident teacher awards, as well as several other awards from Lexington Memorial Hospital. He is a recipient of the Order of the Long Leaf Pine Award, the highest civilian award given in North Carolina by the governor of the state, in 2021. 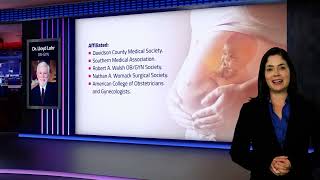