Her willingness to put herself out there and create exciting designs is a major factor that propels her to success.

LIVELY, VA, August 11, 2022 /24-7PressRelease/ -- Linda L. Kreidler has been included in Marquis Who's Who. As in all Marquis Who's Who biographical volumes, individuals profiled are selected on the basis of current reference value. Factors such as position, noteworthy accomplishments, visibility, and prominence in a field are all taken into account during the selection process.

As the president of Kreidler Design Associates, Inc., Linda Kriedler has devoted herself to improving the spaces of her clients.

Ms. Kreidler grew up in an artistic family; her mother and grandmother painted, and her brother was an architect, so it was only natural for her to become interested in art herself. She would explore this passion by pursuing coursework in interior design at Florida Southern College and earning a Bachelor of Arts in interior design at the National Academy of Design in Washington State. She gained early experience working with her architect brother, Jerry, on 100 houses that they built and designed together. He would draw up the plans, and she would design the bathroom and kitchen and add furniture.

By 1975, Ms. Kreidler started her own firm, Kreidler Design Associates, Inc., where she has worked ever since. In terms of her career, the most notable achievement for Ms. Kreidler is when clients tell her that they love their home and thank her because they love what she created. That was more important to her than saying she worked on a famous person's house. It is about her client loving their home and that is her whole purpose. She travels to other states to work for her clients because they don't want to hire anyone but her. In two years, she worked across 11 states.

Years ago, Ms. Kriedler volunteered to work with abused children in a hospital in Washington. She found that she was able to succeed in that role because she could talk to the children in a different way than their parents. In some cases, the work required patience. Because she was worked with children that had been brutally abused, in some cases it took six months or more for them to begin to open up. Once they started talking, they would be moved to another group for treatment and recovery, and she was not able to see them anymore. One day, a young man knocked on her door and asked for Linda Kreidler. This was a young man that she worked with as a child, who was now a lawyer. He spent his entire adult life searching for her so he could thank her.

Ms. Kreidler's success can be attributed to her being willing to step out and take a lot of risks. She comes up with ideas and she follows through with them. Her willingness to put herself out there and create exciting designs is a major factor that propels her to success. She also prides herself on her client relations, which aides her in her work. She spends a great deal of time getting to know her clients, and that helps her get a sense of their design preferences. In years to come, Ms. Kriedler intends to continue with her business and continue to make her clients spaces beautiful. 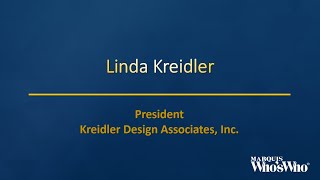