As a doctoral student at Ashland Theological Seminary, Dr. Eckhart is highly regarded for his writing

GROVE CITY, OH, September 14, 2022 /24-7PressRelease/ -- Dr. Don Elijah Eckhart has been included in Marquis Who's Who. As in all Marquis Who's Who biographical volumes, individuals profiled are selected on the basis of current reference value. Factors such as position, noteworthy accomplishments, visibility, and prominence in a field are all taken into account during the selection process.

As a doctoral student with Ashland Theological Seminary, Don Elijah Eckhart has dedicated himself to deepening his spiritual knowledge.

After working for the local government for more than 30 years, Dr. Eckhart changed the trajectory of his career when someone with whom he took a biblical Greek course at the local church told him that he should go to the seminary to obtain further information about what he was doing. He decided to heed that advice, and from then on, he knew it was his calling, and so in 2006, he started taking theology courses in the seminary. Dr. Eckhart earned a Master of Arts in Christian theology from Ashland Theological Seminary in 2015, and a doctorate, also from Ashland Theological Seminary, in 2020.

Over the course of his career, what Dr. Eckhart considers to be his most notable achievement was writing and publishing his book, "Jesus, The Everlasting Hope of Humankind: Biblical Theology Prompted by Visions and Dreams from the Holy Spirit," in 2018. Per the book's description on Amazon.com, "Jesus the Everlasting Hope of Humankind… begins with a vision that came to Don Eckhart of two persons: one, a Spirit-filled Christian and the other in the lake of fire. The vision depicts Jesus saving the desperate one crying out for mercy…Uniquely unfolding in the book are visions and dreams prompting an insightful study of Scripture and a biblical theology developed as the hope of Christ-mediated salvation for all. The effects are far-reaching but not complicated. This coherent theology includes afterlife correction and purification for nonbelievers, as well as for believers who never fully devoted to Jesus Christ. This purification compares to Catherine of Genoa's vision in the early sixteenth century. The book demonstrates how God's desire that all be saved can be accomplished according to Scripture. God's sovereignty and human free will coalesce, as every tongue joyfully confesses that Jesus Christ is Lord. The Good News may be even better than we thought!"

Dr. Eckhart's advice to the next generation who aspires to be in the same position he holds is to stick to the values they believe in, even when times are tough; if they cave in, it will not end well. "Listen carefully and try to understand what the other person is saying. People change, so keep an open mind and deal with them as such." If they intend to enter the ministry, he advises them to first determine which seminary they will attend, because there are various approaches to studying the Bible. They must make certain that a particular seminary's approach is in line with their goals, whether they are ministers or theologians. "Know that working in the government sector necessitates a variety of skills. Determine whether they will be partisan or nonpartisan, as well as those they will be dealing with in terms of the managers who will supervise them and the politicians who will govern them, because it has a huge impact on everything." 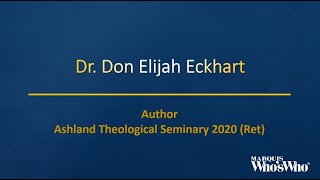