Nia Kiggundu-Carngbe Gets the Star Treatment!

Through the NM Cactus Volleyball Club, Ms. Kiggundu-Carngbe offers a step up from less competitive sports options typically available to young people, such as those offered by the YMCA.

ALBUQUERQUE, NM, September 19, 2022 /24-7PressRelease/ -- Nia Kiggundu-Carngbe has participated in The Star Treatment, a prestigious video series hosted by renowned lawyer and television personality, Star Jones. This premier video series is extremely limited — Marquis Who's Who qualifies 500 listees on an annual basis for this elite service. Backed by a storied career in media that spans more than two decades, Star works closely with Marquis listees to assist with networking goals and commemorative efforts that can be shared with a worldwide audience.

As an elite athlete, Ms. Kiggundu-Carngbe has created a world-class volleyball club that provides opportunities for athletes within her local community ages 8-18. The club, New Mexico Cactus Volleyball Club, was started in 2008 as a way to bring together athletes from lower socioeconomic backgrounds that did not necessarily have access to club volleyball, and did not have the opportunities or financial resources to connect to club sports in that way. Ms. Kiggundu-Carngbe created the volleyball club to serve as a bridge program for athletes to be able to have access to higher level training and exposure.

Through the NM Cactus Volleyball Club, Ms. Kiggundu-Carngbe offers a step up from less competitive sports options typically available to young people, such as those offered by the YMCA. Her inspiration to become involved in club volleyball came from her mentors in middle school, particularly her PE teacher at the time, who saw something special in her, and encouraged her to enter and participate in club volleyball. In that teacher's words, "you really need to see what club volleyball is all about, because I think you can do really well there." The rest was history, as Ms. Kiggundu-Carngbe exceled in the club volleyball environment and helped to jumpstart her collegiate success.

In addition to her work with the NM Cactus Volleyball Club, Ms. Kiggundu-Carngbe is a pharmaceutical sales rep and consultant. Though she is an athlete at heart, she nevertheless feels that the same principles that helped her be successful as an athlete, which are discipline, dedication and hard work, have helped her personally and professionally. Ms. Kiggundu-Carngbe feels strongly that being able to work as part of a team is a critical skill to have in any field. "You're always trying to uplift someone else, and you're never just doing it alone. You have people behind you every step of the way."

Ms. Kiggundu-Carngbe credits her mother and father as her strongest mentors, who gave her the foundation she needed to reach new heights, as well as the values that she carries with her to this day. In terms of volleyball influences, she was inspired by Ms. Sandoval, her middle school coach who first took an interest in her and encouraged her talent and Mr. Guess, her high school coach who taught her everything volleyball. When asked about what she would pass along to a viewer of her video feature, Ms. Kiggundu-Carngbe advises them to "always do your best, and always do what's right, even when no one is watching." With a heart full of humility, Ms. Kiggundu-Carngbe is definitely worthy of the Star Treatment. 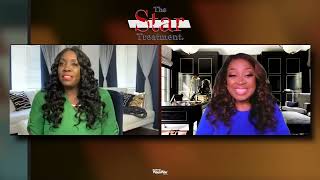