Linda Ann Walter Recognized for Her Passion for Education

Ms. Walter is passionate about helping students achieve confidence and competence through education

PAYSON, UT, September 21, 2022 /24-7PressRelease/ -- Linda Ann Walter has been included in Marquis Who's Who. As in all Marquis Who's Who biographical volumes, individuals profiled are selected on the basis of current reference value. Factors such as position, noteworthy accomplishments, visibility, and prominence in a field are all taken into account during the selection process.

As high school teacher of chemistry, physics and astronomy at Payson High, part of the Nebo School District, Linda Walter shares her scientific expertise with students.

As a young girl, and even today, Ms. Walter considers herself a tomboy. She was raised on a farm by her divorced father, which was very unusual in the 1960s. As a result, she learned to work on the farm, delivering calves, feeding cows and other labor-intensive tasks. She did not view her experience as typical or normal, so it came as no surprise to her when she pursued an interest in science, which was also not typical for women in the 1960s. She earned a Bachelor of Science in Chemistry in physics and mathematics education from Weber State University in 1985, and a Master of Arts in mathematics from Brigham Young University. She has been teaching ever since.

One of the crowning achievements of Ms. Walter's career was her work with QuarkNet. Alongside the group, Ms. Walters studied neutrinos and quarks that entered Earth's atmosphere. When she had the opportunity to visit Switzerland and participate in their largest manmade experiment, she jumped at the chance. It was a great opportunity for her to see cutting-edge matter research techniques.

On a personal level, Ms. Walter is proud to have completed a degree while expecting her eighth child, and also while going through a divorce. She found every way to get her degree completed quickly and efficiently so that she would be able to support her children. She would later have a total of 15 children: Jennifer, Christopher, Melinda, Tracy, Rochelle, Michael, Jared A., Lynn, Curtis, Katy, Jared D., Ben, George, David, and Windy. Later, she became a grandmother of 31, and a great-grandmother of one.

When she was asked about what advice she would pass on to future generations interested in teaching, Ms. Walter advises that they first get rid of deadlines. "Accept late work, even change the work when necessary to reach a specific child and for goals that need to happen." Students need to learn to love the subjects in order to truly succeed in them, in Ms. Walter's opinion, and a less rigid environment makes it easier for them to do that. Moreover, she advises young women to "find something that you truly love, and it doesn't have to be something that anyone has done before you."

Ms. Walter maintains a philosophy of servant leadership with regard to teaching. She hopes that all teachers will remember that the students are the important ones, not teachers. Encouraging a student to reach the level of confidence where they are comfortable with the subject matter is a truly rewarding experience, and reaching that level should be the goal. To this day, the most satisfying part of Ms. Walter's career is having students remember her after decades, and reaching out to thank her. 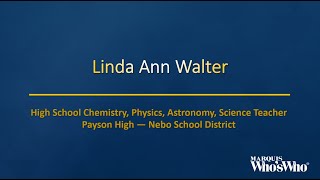