ABILENE, TX, September 21, 2022 /24-7PressRelease/ -- Senior Master Sergeant Christopher Parks has been included in Marquis Who's Who. As in all Marquis Who's Who biographical volumes, individuals profiled are selected on the basis of current reference value. Factors such as position, noteworthy accomplishments, visibility, and prominence in a field are all taken into account during the selection process.

All Mr. Parks wanted to become when he was a child was an interstate truck driver, which was partially motivated by his home life. His mother was one of nine sisters, half of whom moved to New Jersey in the 1950s, while the other half stayed in North Carolina. Every summer, they traveled back and forth between the two areas. In the process of pursuing a trucking career, Mr. Parks joined the U.S. military, in a move he saw as a stepping stone. In reality, he would make that his career for nearly 27 years, leaving the service as a senior master sergeant.

After joining the National Guard in a transportation capacity, Mr. Parks was recruited as a United States Air Force Fire Protection Specialist. Here, he quickly worked his way back into driving trucks. Based on demonstrated skills he was selected as the driver/operator of the P-15. This was the United States Air Forces's largest and one of the world's largest crash fire fighting vehicles. Realizing that he enjoyed the job, he decided to stay in the military while working his way up in the fire industry.

Mr. Parks began as a crush fire rescue man at the United States Air Force and rose through the ranks as a fire chief responsible for 27 bases across Southeast Asia after retiring from duty at the Andrews Air Force Base as fire chief for the President of the United States. He served at the military branch's most prestigious locations, including the United States Air Force Academy and Nellis Air Force Base, which is also called Fightertown USA. He considers working with cadets in those areas as some of the best highlights of his profession. He also prides himself on being called to Bangladesh after his active service to serve as Lead Fire Safety Inspector following the collapse of a 13-story clothing factory in the country. He spearheaded an international team of fire safety engineers that inspected the area and ensured compliance in more than 2,000 facilities. It was a humanitarian project that he found the most rewarding experience in his military career, since he had the opportunity to help people who were injured during the unfortunate event. He also felt great honor working with different specialists from all over the globe. The following year he helped the Federal Emergency Management Agency, inspecting temporary structures they built as part of their hurricane recovery efforts.

Mr. Parks has been involved in motorcycle inventions with Yamaha Motor Co., Ltd. A music enthusiast as well as a serial entrepreneur, he became a self-taught bass guitarist and luthier who has recently ventured into creating a prototype for a line of electric guitars with his brother. He likewise treasured being able to work with former U.S. Secretary of State, Colin Powell, who observed him and his team while they tested the Boeing C-17 Globemaster III in California. He received a Colin Powell Challenge Coin during the event.

Mr. Parks has three sons and one daughter. Two of his sons followed in his footsteps as a military man, and currently live in Jacksonville, Florida. One son served in avionics for the U.S. Navy and is now working at a Baptist hospital. Another son, who joined the United States Army, is interested in motorcycles, undoubtedly influenced by Mr. Parks' fascination for them. His adopted son, who will be completing his doctorate degree in less than a year's time, has become one of the best fire chiefs in the United States Air Force. His daughter, who tragically passed in 2013, was an Air Force veteran and staff sergeant when she left the Air Force as an ER medic. She proudly served at Andrews Air Force Base, Wright Patterson Air Force Base and Incirlik Air Base in Turkey. 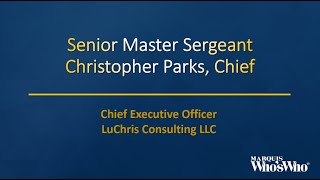