Godfrey Bethea, Jr. Recognized for His Commitment to Diversity and Equity

In addition to his primary career endeavors, Mr. Bethea conducts speaking engagements for conferences and webinars.

CORAOPOLIS, PA, November 22, 2022 /24-7PressRelease/ -- Godfrey Bethea, Jr. has been included in Marquis Who's Who. As in all Marquis Who's Who biographical volumes, individuals profiled are selected on the basis of current reference value. Factors such as position, noteworthy accomplishments, visibility, and prominence in a field are all taken into account during the selection process.

Inspired to bring diversity, equity and inclusion into society, Godfrey Bethea, Jr. is a passionate professional backed by more than 25 years of experience.

At the start of his journey, Mr. Bethea earned a Bachelor of Business Administration from Clarion University of Pennsylvania in 1998. Subsequently, he accepted a role as a manager of commercial and retail services for McCarthy Tire, which he did through 2002 until joining 84 Lumber. With 84 Lumber, he excelled as a co-manager for four years until being promoted to working in diversity business practices in 2006. From 2008 to 2016, Mr. Bethea served as a human resource analyst and business partner for Gateway Health Plan until he was appointed as a diversity, equity and inclusion specialist for FedEx Ground, which he did through 2021. During his time with FedEx, Mr. Bethea was recognized for his dedication and expertise and for bringing local recognition to its inclusion programs. Moreover, he was honored with a Five Star Award by FedEx Ground and a 2019 Rising Star Award from FedEx Corporation.

Alongside his primary work endeavors, Mr. Bethea achieved a Master of Business Administration from Waynesburg University in 2011. He fell into his current line of work in diversity recruiting upon attending job fairs and realizing many people were experiencing the same struggles when looking for jobs. The talent was there and they were ready to work, but human resources professionals needed proper training on educating leaders, eliminating bias and understanding the disparities that exist in society. From there, he became certified in project management and as a professional in human resources, as well as a certified select behavioral interviewer, certified diversity professional from the Diversity Training Institute and an AIRS certified diversity recruiter. Mr. Bethea additionally holds a cultural diversity train-the-trainer certification.

Utilizing his abundance of knowledge in the diversity, equity and inclusion space, Mr. Bethea notably founded Urban Enterprise Business Solutions LLC in 2016, with which he has excelled as the chief executive officer. He has also acted as the vice president of equity, people and culture and the head of the human resources department for the Greater Pittsburgh Community Food Bank since 2021. In this role, Mr. Bethea manages the human resources and diversity, equity and inclusion for the food bank by managing the administration of human resource programs such as performance, staff development, salaries and benefits. He is responsible for building an inclusive environment both internally and externally, such as working with local organizations that focus on equity challenges in the southwestern Pennsylvania region. As a member of the executive team, Mr. Bethea leads initiatives to infuse fair and equitable policies and programs across all organization functions and manages personnel.

In addition to his primary career endeavors, Mr. Bethea conducts speaking engagements for conferences and webinars. He has served as a member of the board of directors for the Pittsburgh Human Resources Association since 2013 and has notably been featured in a TV press release for the Community Champion for Pittsburgh Award in 2021. Mr. Bethea attributes his success to the different training and certification programs that he went through for diversity, equity and inclusion. He credits these programs as the foundation of his education, enabling him to positively impact companies with his work. In addition, he recalls shifting his focus to acknowledging his weaknesses and growing upon them through setting goals and journaling in the process. Mr. Bethea also recognizes the influence of his father, who was a pastor known for his untraditional wisdom and encouragement.

With this sentiment, Mr. Bethea's advice to the next generation who aspires to work in the same field is to view every professional and personal experience as a learning opportunity to broaden their knowledge base, learn and grow. He notes it is important to remain empathetic and to always see the bigger picture of situations. 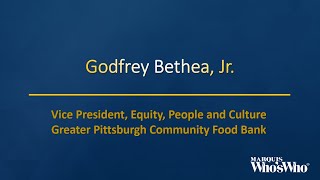