Looking toward the future, Ms. Grichuhin hopes to continue to grow within Supernus Pharmaceuticals, Inc. and eventually have the opportunity to run her own department.

WESTMINSTER, MD, November 22, 2022 /24-7PressRelease/ -- Kendra Grichuhin has been included in Marquis Who's Who. As in all Marquis Who's Who biographical volumes, individuals profiled are selected on the basis of current reference value. Factors such as position, noteworthy accomplishments, visibility, and prominence in a field are all taken into account during the selection process.

A respected and skilled regulatory affairs professional within the pharmaceutical industry, Kendra Grichuhin longed for a career in health care. However, her journey to today was not what she had originally planned.

Intending to pursue a career as a nurse, Ms. Grichuhin first earned an Associate of Science from the Community College of Baltimore County. While taking her nursing pre-requisite courses, she fell in love with the sciences, particularly microbiology, and continued her studies with a Bachelor of Science from the University of Charleston in West Virginia. In 2006, she attained a Master of Science in microbiology from the University of Iowa and began her search for professional work. From there, Ms. Gichuhin returned to her early thoughts of a career in health care, this time turning her focus to laboratory research.

Ms. Grichuhin joined Vanda Pharmaceuticals in 2013, where she spent her first two years doing work with genotyping samples. She then concluded her tenure with the company as a regulatory and quality assurance manager, which she did from 2015 to 2016. In 2020, Ms. Grichuhin joined Supernus Pharmaceuticals, Inc., where she quickly achieved the position of director of regulatory affairs by 2021. She notes the company has quadrupled in size since she joined the team.

During her time at Supernus Pharmaceuticals, Ms. Grichuhin served as the regulatory lead for the program for Oxtellar XR, an epilepsy medication, as well as the regulatory representative for one of their investigational programs. Additionally, she became the regulatory and program lead for their company regarding developing a drug with a novel mechanism of action for treating depression, as well as a nonstimulant medication for treating ADHD. An expert in Food and Drug Administration (FDA) communications, submissions and strategy, Mrs. Grichuhin likewise develops strategies for the clinical development program to comply with the FDA.

Finding success early in her career, Ms. Grichuhin was inducted into TriBeta, the national biological honor society, and she maintains affiliation with the Regulatory Affairs Professionals Society to keep up to date with new developments in the field. Having accomplished much throughout her career, she considers her professional highlight to be the fact that she has been involved in three projects that have received regulatory body approvals, two new drug application approvals and one marketing authorization application approval. She recalls that when the first approval happened, the approval letter was privileged information, so she and her team spent the entire day the letter arrived checking to see if the announcement press release had been posted.

Upon reflection, Ms. Grichuhin attributes her success to the great mentorship she has had throughout her career. Before entering regulatory affairs, she did not have much experience in the clinical side of the field. With the guidance and support of her mentors, including her supervisor at Supernus, she was able to pick up the requisite skills quickly. In addition, Ms. Grichuhin credits much of her success to her drive and desire to excel in her work. She considers her favorite aspect of her career to be bringing products to market that will help patients, noting that nothing more gratifying than seeing a project you have been working on for years get approval.

Looking toward the future, Ms. Grichuhin hopes to continue to grow within Supernus Pharmaceuticals, Inc. and eventually have the opportunity to run her own department. Likewise, she plans to take on more of a mentoring role with junior employees since mentorship was pivotal to her own professional development. 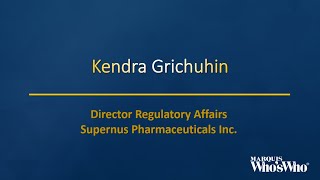