Mr. Hoyt has experienced success with Deere & Company and the Commission on Ministry of the Presbytery of East Iowa

DAVENPORT, IA, November 22, 2022 /24-7PressRelease/ -- Harry G. Hoyt has been included in Marquis Who's Who. As in all Marquis Who's Who biographical volumes, individuals profiled are selected on the basis of current reference value. Factors such as position, noteworthy accomplishments, visibility, and prominence in a field are all taken into account during the selection process.

Upon earning a Bachelor of Arts in economics from Carleton College in 1959, Mr. Hoyt entered the U.S. Navy as a line officer. Four years later, he received an honorable discharge from the military and began his first career with Deere & Company in the Quad Cities area of Iowa and Illinois, where many of his family members had also been employed. For his first three years, he served as an engineering analyst with John Deere Harvester Works. He later acted as a systems analyst, foreman, training coordinator and manager of personnel for the company through 1970. Mr. Hoyt remained employed with Deere & Company until 1989, acting as manager of salary administration overseas, manager of compensation worldwide and manager of personnel again until changing career paths.

Mr. Hoyt began his second career volunteering with the Commission on Ministry of the Presbytery of East Iowa and became an ordained elder in 1992. Consisting of 72 Presbyterian churches in eastern Iowa, he substantially reorganized the operation of the Commission, mediated conflicts within churches and developed and wrote a child protection policy and the Pastor Compensation Program that replaced the then-current compensation system in use by all churches in the Presbytery. His method was adopted in 1998 and is still in use today. In 2001, he was appointed co-moderator for the Commission on Ministry, after which he became a salaried staff consultant in 2003. Mr. Hoyt notably served the Presbytery for 21 years, retiring from this second career in September 2018.

Throughout the course of his career, Mr. Hoyt has also owned several small businesses, including apartment and office buildings, a car wash and a gas station. He was also a founder and director of the United Saving Association for seven years and president for two of those years. During his tenure in religious service, Mr. Hoyt has also contributed to the First Presbyterian Church of Davenport as a member and chair of the church's governing and personnel committee. Additionally, Mr. Hoyt chaired a committee responsible for raising more than $2 million in funding for major renovations and then directed their installation on behalf of the church. Likewise, he developed and wrote significant amendments for the church's Development Fund to turn it into a foundation with four funding sources.

Long dedicated to civic advocacy, Mr. Hoyt has acted as a board member for various organizations and committees that seek to support his community. Involved with his local chamber of commerce, he has dedicated time to the Vera French Community Mental Health Center, where he served for a period as secretary, founder and president of the Quint Cities Drug Abuse Council for six years and served on two task forces to advise the governor and legislature regarding drug-related legislation. In response to the economic downturn in the late 1980s, he co-chaired, "Quad Cities Vision for the Future" a strategic planning committee of community leaders, among other leadership roles to his credit.

Known to be a prolific writer within his primary work, Mr. Hoyt has also exhibited his skill with the written word on a more personal level. He is the author of various publications, including a book describing his wife's battle with cancer through a bone marrow transplant titled "Back from the Brink: A Love Story." He combined two of his hobbies of photography and travel by writing four photographic journals containing approximately 1,000 pages of photos and commentary on the people, animals in the wild and scenery of four African countries.

Upon reflection, Mr. Hoyt credits his success in multiple fields to his ability to take risks, build relationships and learn from his own mistakes. Additionally, he credits the influence of various mentors in his life, including his grandmother, his uncle and Richard McFeely, who was the headmaster of the school he attended. Mr. Hoyt is particularly honored to have a gymnasium named after him, along with the multiple plaques he has received over the years from Deere & Company, the Council on International Compensation, United Way and the Quad Cities Drug Abuse Council.

A family man to his core, Mr. Hoyt aspires to remain an instrumental figure in his own family, particularly with his grandchildren. Looking toward the future, he plans to host even more family reunions and share his years of professional wisdom. 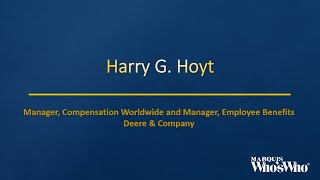