Dr. Omekanda received the 2021 Taguchi Excellence Award from the International Conference on the Robust Quality of Engineering

A research engineer of more than three decades, Avoki Michel Omekanda, PhD holds more than 80 patents and an endless amount of knowledge.

OAKLAND TOWNSHIP, MI, November 22, 2022 /24-7PressRelease/ -- Avoki Michel Omekanda, PhD has been included in Marquis Who's Who. As in all Marquis Who's Who biographical volumes, individuals profiled are selected on the basis of current reference value. Factors such as position, noteworthy accomplishments, visibility, and prominence in a field are all taken into account during the selection process.

A research engineer of more than three decades, Avoki Michel Omekanda, PhD holds more than 80 patents and an endless amount of knowledge.

Born in the Democratic Republic of the Congo, Dr. Omekanda initially obtained a Bachelor of Science in physics from Mohammed V University in Rabat, Morocco in 1984. He commenced his professional endeavors when accepting a role as a research engineer in the Department of Electric Machines and Mechanics for the ACEC Corporation's Research & Development Laboratories in Charleroi, Belgium in 1987. During this time, he continued his education with a diploma in electrical engineering, electric power and machines, along with a Doctor of Philosophy in electrical engineering obtained in 1993 from the Faculty of Engineering of the University of Mons in Belgium. Equipped with newfound skill, Dr. Omekanda served the institution from 1990 to 1995 in various roles, including as a research engineer, research assistant and assistant professor of electrical and power electronics engineering.

Presently, Dr. Omekanda excels as a staff research engineer for the Propulsion Systems Research Laboratory, a role he began in 2010. Additionally, since 2014, he has taught as a professor of electrical engineering at Institut Supérieur de Techniques Appliquées in the Democratic Republic of the Congo. With more than three decades of engineering experience to his credit, Dr. Omekanda has focused on the design, analysis and control of electric machines, actuators, electromagnetic sensors, robust engineering, acoustics, vibration and computation of electromagnetic fields. Simultaneous to his current positions, he attained a Master of Science in developmental practice from Regis University in Denver, Colorado in 2018.

As a fellow of the Institute of Electric and Electronic Engineers (IEEE), Dr. Omekanda has authored and co-authored more than 60 international publications in referred journals, such as IEEE Transactions on Industry Applications and IEEE Industrial Electronics Magazine. Likewise, he has chaired the IEEE's Energy Conversion Congress and Exposition Steering Committee, Industry Application Society Inter-Society Cooperation Committee, Electric Machines Committee and Industrial Power Conversions Systems Department. The vice chair of the governing board for the IEEE Smart Village in 2022, he has been additionally involved with the nonprofit organization Light Up A Village, which aids people in his native country through education, electricity and entrepreneurship.

Most notably, Dr. Omekanda's has received numerous professional honors in his career, with recent accolades including the 2021 Taguchi Excellence Award for Paper on DFSS of Electric Machine from the International Conference on the Robust Quality of Engineering and the 2018 Recognition Service Award as Technical Program Co-Chair of the IEEE-ECCE. He was also the recipient of the Science Spectrum Trailblazer Award from the National Council of Engineering Deans of the Historically Black College and Universities, Lockheed Martin Corporation, and U.S. Black Engineer & Information Technology Magazine in 2014. An inductee into the Delphi Innovation Hall of Fame, Dr. Omekanda and his former colleagues at Delphi Powertrain Systems were distinguished as finalists for an Automotive News PACE Award for their work with rotary position sensors in 2005. Among numerous other achievements, he attributes a great deal of his success to the inspirational nature of his work environment, as well as the availability of critical resources for personal and breakthrough research.

Looking toward the future, Dr. Omekanda is playing a central role in the increasing prevalence of electric machines in the transportation industry while serving as a mentor to his younger IEEE colleagues. He intends to participate in the revolution of vehicle electrification, which proposes replacing thermal combustion engines with electric machines in the transportation sector, to address the threat of carbon emissions to climate change. Dr. Omekanda advises budding engineers to stay humble, be open to learning and strive for excellence. His motto is, "Never give up. Everything is possible for people who work hard." 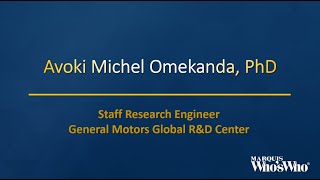