MURRIETA, CA, November 22, 2022 /24-7PressRelease/ -- Walter Aaron Clark, PhD has been included in Marquis Who's Who. As in all Marquis Who's Who biographical volumes, individuals profiled are selected on the basis of current reference value. Factors such as position, noteworthy accomplishments, visibility, and prominence in a field are all taken into account during the selection process.

A distinguished educator and musician for over three decades, Walter Aaron Clark, PhD believes he has fulfilled his life's purpose by preserving and promoting culture through music.

Dr. Clark recalls that the first spark of interest in music was ignited during the time of The Beatles, which led him to pursue guitar lessons in his early teens. One day, as he arrived at his lesson, he heard his instructor playing "Malagueña," a Spanish-style piece by Cuban composer Ernesto Lecuona, which changed his entire outlook on the guitar. He quickly fell in love with Spanish music and began lessons in classical and flamenco guitar, which prepared him to embark on professional studies in music performance and musicology. Enrolling at the University of North Carolina School of the Arts, Dr. Clark first earned a Bachelor of Music in guitar performance in 1975 before heading to the West Coast, where he attained a Master of Arts in guitar performance from the University of California, San Diego in 1984 and a Doctor of Philosophy in musicology from the University of California, Los Angeles in 1992.

While pursuing his degrees in guitar performance, Dr. Clark participated in a master class with Andrés Segovia and studied with Pepe Romero. During his doctoral studies, he was inspired and mentored by one of the leading experts in his area, Robert Stevenson, who encouraged him to write about Spanish national opera, a topic that was very much off the beaten path at the time. However, Dr. Clark notes that taking the road less traveled paid off in the long run. Today, he has broadened his focus to embrace the entire Ibero-American musical heritage.

At the start of his professional endeavors, Dr. Clark gained valuable experience first as a lecturer at Scripps College, Pomona College, California State University, Long Beach and the University of California, Los Angeles, and then as a professor at the University of Kansas from 1993 to 2003. For the past 19 years, he has excelled as a distinguished professor of musicology at the University of California, Riverside. In this post, he teaches a full range of undergraduate and graduate classes and has also chaired the music department, served on various university committees, organized conferences, and conducted research throughout Europe and the Americas. He is in national and international demand as a speaker.

Alongside his teaching, Dr. Clark is the founder and director of the Center for Iberian and Latin American Music at the University of California, Riverside, and editor-in-chief of its refereed online journal, Diagonal: An Ibero-American Music Review. In addition, he was the founder and editor of the Oxford series Currents in Latin American and Iberian Music and is now editor-in-chief of Oxford's 11-volume Grove Dictionary of Latin American and Iberian Music. He has also served as an editorial board member for Revista de Musicología, Monumentos de la Música Española, Cuadernos de Música Iberoamericana, Música em Contexto, Soundboard Scholar and the Encyclopedia of Latin American Popular Music.

A prolific writer, Dr. Clark authored the Oxford biographies Isaac Albéniz: Portrait of a Romantic, Enrique Granados: Poet of the Piano, and (with William Krause) Federico Moreno Torroba: A Musical Life in Three Acts, all of them now available in Spanish translation. He contributed volumes on Albéniz and Joaquín Rodrigo to Routledge's Research and Information Guide series and wrote the book Los Romeros: Royal Family of the Spanish Guitar, published by the University of Illinois Press. He was the contributing editor of the Routledge volume From Tejano to Tango: Latin American Popular Music and the contributing co-editor of the Norton textbook Musics of Latin America.

Having achieved notable success throughout his career, Dr. Clark is most proud of being awarded the title Comendador de la Orden de Isabel la Católica, a Spanish knighthood, granted to him in 2016 by King Felipe VI in recognition of his contributions to the study and promotion of Spanish music and culture. Additionally, he has also been the recipient of a Fulbright grant to West Germany from 1984 to 1986, the Ralph Vaughan Williams Research Fellowship in England in 1992 and the Robert M. Stevenson Award in Ibero-American Musicology from the American Musicological Society in 2006.

To remain abreast of developments in his field, Dr. Clark is an active member of the American Musicological Society and the Spanish Musicological Society. He is also involved with the Riverside Arts Academy, which provides music training to underprivileged youth. Looking toward the future, he aims to retire within the next few years but not before completing the various projects in which he is currently involved, including a major biography of Rodrigo for W.W. Norton. He plans to pursue a doctorate in Spanish and become active in charitable work, helping people directly. 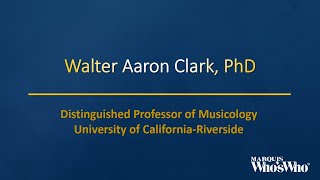