Ryan W. McCarrick, EMT-P Honored for His Commitment to Helping Others

Mr. McCarrick was honored as the Rocky Point Fire Department EMT of the Year in 2016

Mr. McCarrick takes great pride in saving people's lives by performing CPR, along with his non-911-related work in New York City for one year during the height of the COVID-19 pandemic.

SHOREHAM, NY, November 22, 2022 /24-7PressRelease/ -- Ryan W. McCarrick, EMT-P has been included in Marquis Who's Who. As in all Marquis Who's Who biographical volumes, individuals profiled are selected on the basis of current reference value. Factors such as position, noteworthy accomplishments, visibility, and prominence in a field are all taken into account during the selection process.

Backed by over one decade of experience in emergency medical services, Ryan W. McCarrick, EMT-P has enjoyed a rewarding career as a paramedic, fueled by his passion for helping others.

A native of Long Island, New York, Mr. McCarrick was deeply impacted by the events of September 11, 2001, which took place during his middle school years. The fact that his father had been working at the New York Police Department for two years at the time amplified the magnitude of the day and ultimately inspired his involvement in the healthcare industry. After becoming eligible for emergency medical technician (EMT) work at 18, Mr. McCarrick was determined to pursue a profession that made a difference in helping people. He subsequently started volunteering at Rocky Point Fire Department, owing to the influence of his family, who were vastly involved in firefighting and law enforcement.

Despite his early efforts in volunteer firefighting, Mr. McCarrick chose to become a volunteer EMT. As EMTs were not hired very often in his region, he began serving as a paramedic and subsequently passed his advanced EMT certification test. Mr. McCarrick first conducted coursework in public health at Excelsior College from 2017 to 2018 and attained his NREMT-Paramedic Certification from Stony Brook University in 2018. He considers his graduation from the Stony Brook University program as one of his most significant accomplishments, as he was one of only nine students who completed the course from an original class size of 32.

Delving into his work, Mr. McCarrick refined his expertise as a paramedic for the Bridgehampton Fire District and the Cold Spring Harbor Fire Department between 2018 and 2020. Today, he excels in his current roles as a paramedic for the Wading River Fire District, West Babylon Fire District and the Rocky Point Fire Department, which he has done since 2020. Simultaneously, he also worked with Ready Responders, Inc. from 2020 to 2021 and has been a member of the Suffolk County Medical Reserve Corps since 2019.

Honored on numerous occasions throughout his career, Mr. McCarrick was honored by the Rocky Point Fire Department for registering the highest response rate amongst his fellow EMTs from 2014 to 2017. In addition, he was the recipient of a 10-year volunteer work award, as well as selected for the department's EMT of the Year Award in 2016 and Captain's Award for the 2015-2016 year. He attributes his success to the abundance of support of his family, as well as his powerful motivation to prove that he could surmount challenges some people did not expect him to overcome, such as being able to finish the most difficult kind of paramedic course. He also credits the influence of his colleague, Patty Logan, who was one of the first people to train him early on in his career.

Reflecting upon his career thus far, Mr. McCarrick takes great pride in saving people's lives by performing CPR, along with his non-911-related work in New York City for one year during the height of the COVID-19 pandemic. In the coming years, Mr. McCarrick intends to obtain a degree in public health from the Kent State University College of Public Health, as well as pursue leadership positions in local, county and state EMS agencies. He believes that there is much to be accomplished in the field, including work pertaining to injury prevention and education. 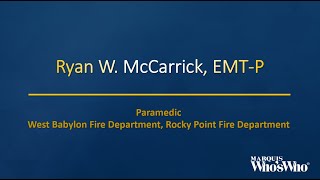