Since 1970, Mr. Bickford has excelled as a real estate developer through his firm, Midlantic Builders LLC

He nurses ailing properties back to standardized value, sells those properties and finds other properties to which he can apply his expertise.

NORFOLK, VA, December 06, 2022 /24-7PressRelease/ -- James VanAllen Bickford III has been included in Marquis Who's Who. As in all Marquis Who's Who biographical volumes, individuals profiled are selected on the basis of current reference value. Factors such as position, noteworthy accomplishments, visibility, and prominence in a field are all taken into account during the selection process.

At the start of his professional journey, Mr. Bickford attended the Virginia Military Institute in Lexington, Virginia, where he received a Bachelor of Science in engineering in 1961 and was inducted into the Kappa Alpha Honor fraternity. Subsequently, he worked at the Langley Research Center, affiliated with the National Aeronautics and Space Administration (NASA), within their Mercury Program for several years. Mr. Bickford then entered the United States Army as an engineer in the 82nd Airborne Unit at Fort Bragg, North Carolina, serving from 1963 to 1965.

Upon his discharge from the military, Mr. Bickford went on to work with his uncle in Hampton, Virginia, developing land and constructing real estate. From this experience, he went on to study city planning at the University of North Carolina, where he attained a master's degree and became a certified property manager in the States of North Carolina and Virginia shortly after that.

With this background, Mr. Bickford sought to spearhead his own entrepreneurial endeavor in his field and since 1970, he has excelled as a real estate developer for his firm, Midlantic Builders LLC in Norfolk, Virginia. In this prominent role, he nurses ailing properties back to standardized value, sells those properties and finds other properties to which he can apply his expertise. Some notable projects to his credit include The Villages at Ocean Hill community in Corolla, North Carolina, which has been his largest project to date, as well as various developments in the Outer Banks.

In addition to his primary work, Mr. Bickford spends his spare time teaching cooking classes and educating the homeless population in aspects of art, which has always been a hobby and passion of his. Likewise, he has served on the board of directors of the American Society of Marine Artists. He also donates money to the homeless population for civil service.

A devoted Christian, Mr. Bickford formerly attended the Institute for Spiritual Formation in Washington, D.C. He notes that he feels blessed to enjoy his time on Earth through God, as well as experience all of life's joys through his wife of 60 years, Blair, and four sons: James, Christopher, Nathan and David. He also has one grandson, Dylan. Ultimately, he attributes his immense success to his perseverance through struggle and his ability to never give up.

To remain aware of changes and developments in his line of work and interests, Mr. Bickford maintains affiliation with the National Association of Homebuilders, the Christ and St. Luke Episcopal Church and the Diocese of Southern Virginia, where he has sat on their standing committee. He is also a past president of his local chapter of Outer Banks. Looking toward the future, he intends to experience the continued growth and success of his real estate career through even more selling and buying of properties. 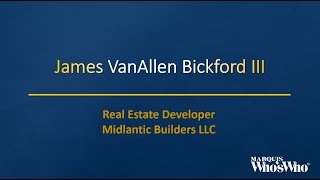