Richard G. Runyon Honored for His Contributions in Resolving Important Cases for the FDA

Mr. Richard G. Runyon is a member of the Union of Concerned Scientists and the American Association for the Advancement of Science

Having accrued years of expertise in environmental protection and education, Mr. Runyon has excelled in a career that has taken him worldwide, all while with a goal to keep people safe.

SEATTLE, WA, January 16, 2023 /24-7PressRelease/ -- Richard G. Runyon has been included in Marquis Who's Who. As in all Marquis Who's Who biographical volumes, individuals profiled are selected on the basis of current reference value. Factors such as position, noteworthy accomplishments, visibility, and prominence in a field are all taken into account during the selection process.

Having accrued years of expertise in environmental protection and education, Mr. Runyon has excelled in a career that has taken him worldwide, all while with a goal to keep people safe.

At the start of his professional journey, Mr. Runyon earned a Bachelor of Science in criminal justice from California State University, Los Angeles in 1971. He went on to matriculate at Humboldt State University, now known as California State Polytechnic University, Humboldt, where he attained a Bachelor of Arts in biology in 1975 and a Master of Science in biology in 1978. Simultaneously, he had served as a biology instructor at the College of the Redwoods and later at Allan Hancock College. Mr. Runyon continued his association with academia by serving as an adjunct assistant professor at Chapman University from 1981 to 1989, where he taught classes in environmental studies, drugs and society, and genetics. During this period, Mr. Runyon notably conducted classroom instruction at Vandenberg Air Force Base, now known as Vandenberg Space Force Base, and the United States Penitentiary in Lompoc, California.

To add to his career endeavors, Mr. Runyon served as an environmental health specialist for Santa Barbara County between 1979 and 1984, where he assisted in regulating swimming pool and restaurant kitchen construction and operation, water wells and water system design and construction. In the mid-1980s, he excelled as a facilities coordinator at the Lockheed Space Operations Command at Vandenberg, in which he managed a plant treating the space shuttle launch suppression water which would become acidic and contaminated with heavy metals during the launches. In addition, Mr. Runyon expertly managed the hazardous materials program for Santa Barbara County from 1986 until 1989.

For 11 years until 2000, Mr. Runyon worked as a senior scientist at NUS/Scientech Inc., serving as a global provider of consulting services to improve safety, plant performance and reliability. He aided in risk assessment and emergency management in diverse locations, including with Taiwan's EPA, refineries in Mexico, petrochemical plants, heavy industries and pipelines in Trinidad, petrochemical and heavy industries in Saudi Arabia, conventional power plants in Nevis and in managing emergencies at nuclear plants in Yugoslavia, now Slovenia, and Japan, among other achievements. Between 2000 and 2014, he took on roles as a supervisor, investigator and senior program analyst for the U.S. Food and Drug Administration (FDA), the latter specifically working in the office of the Associate Commissioner of Regulatory Affairs (ACRA).

Mr. Runyon notes that one of his most important projects involved the FDA regarding a substantial pet food scandal against two animal food component manufacturers in China. As a senior investigator, he was sent to the country with a colleague to investigate an allegation that both animal food manufacturers were using various compounds, resulting in the deaths of hundreds of dogs and cats. The investigation found that both companies were no longer in business and the owners and operators of each business were detained and subsequently arrested by local police. The FDA also obtained the indictments of those in both China and the U.S. who were aware of the contaminated pet food but chose to allow it. The U.S. company was eventually convicted in Federal Court.

To remain abreast of his industry, Mr. Runyon maintains membership with the Union of Concerned Scientists, the American Association for the Advancement of Science, the California State University Los Angeles Alumni Association and the Humboldt State University Alumni Association. Civically engaged, he was also a member and past president of his local chapter of Toastmasters International. Mr. Runyon has also lent his time and expertise by hosting lectures and field trips to interested community members regarding the history of poisonous and medicinal plants.

Reflecting on his productive career, Mr. Runyon feels honored to have been part of such exceptional experiences centered on keeping people safe. He cites his commitment to perseverance as a critical factor in his success. Initially, Mr. Runyon wished to become involved in criminal justice, but after taking a biology course that was a prerequisite for his degree, he discovered a passion for the study of biology and has been able to pair that with his love for travel, which was instilled in him by his parents, as they took many trips during his childhood. Since then, he has never looked back. 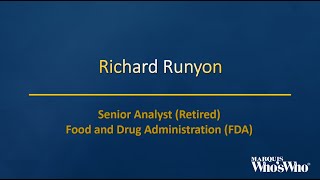