Mr. Jerome C. Axelrod provides his clients with a better lifestyle through his financial advising

Mr. Axelrod encourages budding investment advisors to set goals and make sure to find satisfaction in their work.

HOUSTON, TX, January 17, 2023 /24-7PressRelease/ -- Jerome C. Axelrod has been included in Marquis Who's Who. As in all Marquis Who's Who biographical volumes, individuals profiled are selected on the basis of current reference value. Factors such as position, noteworthy accomplishments, visibility, and prominence in a field are all taken into account during the selection process.

Forging a distinguished career in the investment industry, Jerome C. Axelrod is highly regarded for his three decades of professional expertise.

In 1990, Mr. Axelrod became the senior vice president of Donaldson, Lufkin & Jenrette, where he remained for 11 years until 2001 when he accepted a position with Citigroup Smith Barney in Houston, Texas. In this role, he focused on advising high-net-worth individuals on investments. By 2009, Mr. Axelrod embarked on his next professional venture with Burnham Securities Inc. as managing director from 2010 to 2011.

Drawing on years of professional expertise, Mr. Axelrod currently excels as the managing director of Stark Capital Management in Houston. Since 2011, he has advised both high-net-worth individuals and institutions. In light of his professional accomplishments, Mr. Axelrod has been honored on multiple occasions, becoming an Outstanding Broker in 1984 and being ranked Number One on the Broker List. While his career has been filled with highlights, he is incredibly proud of helping provide his clients with a better lifestyle through his financial advising. Likewise, he attributes his success to his persistence and empathy, which helped him realize the needs of his clients.

Above all, Mr. Axelrod's crowning achievement has been his two children, John and Lauren. A family man to his core, he notes he has learned much about business and life from his parents. He credits his father, Abe, for being his biggest inspiration, as he was a man who kept his nose to the grindstone and never gave up. His mother, Dora, was always nurturing and encouraging, which he has tried to pass on to his children and grandchildren. Mr. Axelrod has also been inspired by his former colleague George Stark.

Alongside his primary responsibilities, Mr. Axelrod has dedicated himself as an active member in his community through involvement as a founding board member of the Houston Children's Museum and Orchestra X, which provides mental health services in some of Chicago's most distressed neighborhoods. Additionally, he served on the advisory board of Interface Ministries and is a former chairperson of the Southwest Region for the Anti-Defamation League. Mr. Axelrod feels that in order to be a standup citizen, it is necessary to give back to your community not for business purposes but for personal satisfaction and fulfillment.

In a career trajectory marked by perseverance, determination and a strong work ethic, Mr. Axelrod encourages budding investment advisors to set goals and make sure to find satisfaction in their work. He adds, be an honest and unbiased deliverer of the information you are giving – and just keep at it. Looking toward the future, Mr. Axelrod aims to expand his business and ensure that his clients can withstand all the trials and tribulations they may face within the market. 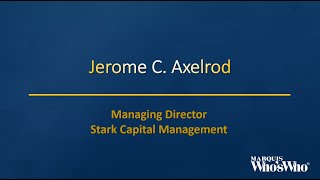