Japan-based Ateam Inc. has released smartphone trivia RPG "Trivia Saga" on both the App Store and Google Play in 126 Countries!

*Solve Trivia Questions to Progress in Your Adventure!
The game's trivia questions have been culturalized for western audiences and feature topics ranging from popular culture to world history. The combination of trivia and fantasy makes this title enjoyable by fans of both genres!

*A Fantasy World Brought to Life with Beautiful Graphics!
The 2D/3D fusion graphics and smooth animation of the numerous characters bring the captivating world of Trivia Kingdom to life.

*Strengthen Your Allies!
Power up the unique characters that you summon or meet on your adventures. Mix and match your party by the characters' magic skills and passive abilities to create a team that suits your tastes!

To celebrate the release of "Trivia Saga", there will be special login bonuses and an Ally Enhancement campaign within the game! Give your party a head start!

*Daily Login Bonuses in Celebration of the Release!
Tentative Availability: 10/29 (Thu.) - 11/30 (Mon.)
5 Gems will be sent to your Gift Box every day you log in during the above period.

*Limited Time Only! Ally Enhancement Campaign
Tentative Availability: 10/29 (Thu.) - 11/4 (Wed.)
When you Enhance your allies during the above period, your chance for a "great success", which massively increases the EXP your allies earn, is tripled. Strengthen your party and stand up to anyone who challenges you!

Ateam will regularly release updates and additional content in order to make "Trivia Saga" the best game it can be, so look forward to what we have in store!

Supported Devices:
Those with iOS 7.0 or higher, Android devices that come standard with Android 4.1 or later (excluding some devices)
*Supported devices are tentative and subject to change upon release.

About the Company:
Ateam Inc. is a publicly traded technology company in Japan operating across a variety of industry sectors. In addition to developing games for every major mobile platform, the organization also offers both commercial and personal web service and management solutions. 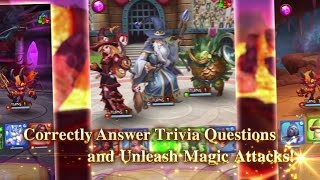