The first ever study of home network security to use data from real networks shows wide-spread vulnerabilities. The majority of problems found are easily fixed, yet consumers remain unaware.

TORONTO, ON, August 28, 2015 /24-7PressRelease/ -- Sericon Technology has published the first ever report on the state of security for the Connected Home that uses actual user data. This study is based on scans of more than 15,000 home networks worldwide by RouterCheck, the consumer tool for home router security. The data shows that 85 percent of the networks tested by RouterCheck are at risk of cyber attack due to problems that can easily be fixed by users or router vendors.

"RouterCheck's real-world data shows that on average, a home network has 1.8 vulnerabilities," said Sander Smith, President of Sericon Technology, the developer of RouterCheck. "From insecure passwords to poorly configured wireless security, these vulnerabilities mean that the average home is at risk from hackers all over the world."

Many of the vulnerabilities found were simply due to the standard configuration that routers have right out of the box. Examples include:

RouterCheck provides users with a third-party security audit of their network, identifies problems, and then gives the user easy-to-follow instructions for fixing the problems. Smith said, "Our data shows that once users are made aware of the problems in their networks, many will fix these problems so that their networks are more secure."

The full report is available at

About RouterCheck: RouterCheck (www.RouterCheck.com) is the first consumer-oriented tool for protecting home routers. It is delivered as an Android app and it identifies problems with both a router's configuration and internal software. Problems discovered while using RouterCheck can usually be fixed by following the instructions provided by the integrated RouterCheck Support application. RouterCheck is developed by Sericon Technology in Toronto, Canada. 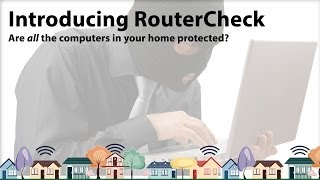