It's literally like the lyrics in Frank Sinatra's song 'I've got you under my skin'!

Some think it's offensive, while a huge amount of tattoo lovers thinks it's an amazing concept.

BUCHS, SWITZERLAND, February 13, 2018 /24-7PressRelease/ -- Almost unbelievable to some and even shocking to others, Swiss company SKIN46 is going to launch a huge campaign of body art shock and awe promoting the first biogenic tattoo ink made from a family member, friend, loved one or pet's hair - illustrating a bond that can't be broken that the world can see.

Traditionally tattoos have been, among many other things, a way to show bonds that stand the test of time embraced by everyone from lovers, to family members, to military units and motorcycle clubs.

With science creating breakthroughs everywhere, forward-thinking tattoo ink company SKIN46 has blasted this idea into the 21st century and beyond with the recent jaw-dropping announcement that the age of biogenic tattoos has officially begun with pre-registry for the craziest crowdfunding campaign ever on Kickstarter - SKIN46 is turning to the public to make production of the world's first tattoo ink from human (or pet) bio-material possible. And interest couldn't be higher.

"The idea of SKIN46 tattoo ink starts some seriously spirited conversations," commented Andreas Wampl, inventor and founder of SKIN46. "Some think it's offensive, while a huge amount of tattoo lovers thinks it's an amazing concept. We expect this to draw a lot of attention both to our crowdfunding campaign and to SKIN46 in general. Tattooing needs this kind of fresh spirit."

The good news is the whole process behind the ink is safe for all involved from start to finish. And SKIN46 tattoo ink will be affordable, leaving the door open for just about anyone who can afford a tattoo to take it to the next level and go with the cool new ink should they choose, carrying their bonds of loyalty not just in their hearts, but also under their skin.

With 100 million people and counting in Europe, the United States and Canada proudly tattooed, don't bet against the chances of SKIN46 being the next big thing.

SKIN46 is a Switzerland based Start-up founded in 2015. Founder & Inventor, Andreas Wampl, patented a method for producing a tattoo ink made of human and/or animal material (hair). 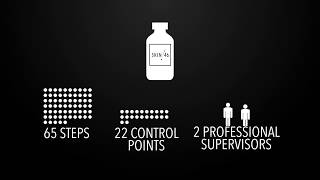