"When everyone else, and even my parents, turned their backs on me, Amudim was there," says Malky, 18, of Brooklyn, NY who was sexually abused by her elder brother in her early childhood.

NEW YORK, NY, July 24, 2018 /24-7PressRelease/ -- For decades, sexual abuse and addiction were taboo in the Jewish Orthodox sector. Orthodox life is family-centered, and modesty is a strongly-ingrained value. Neighborhoods dominated by Orthodox Jews are usually safe, with crime rates remarkably low. Yet as in all societies, cultural ills exist.

One hero spearheading positive change in the Orthodox sector is Rabbi Zvi Gluck, founder of Amudim, an association and crisis center combating societal ills often swept under the carpet. "We operate with encouragement of [Orthodox] rabbis who acknowledge that without such a place, we're facing community-wide disaster," explains Gluck.

Malky was a sheltered adolescent growing up in the heart of Brooklyn. Born into a large family and attending a private girls' school, she was the typical Jewish Orthodox teen.

Everything exploded when Malky approached Amudim and confided that she suffered pedophilic urges. Gluck's team paired Malky with a therapist and found her a host family. She eventually confessed that she'd been sexually abused as a youngster, yet refused to disclose the molester's identity, determined to shield him, or perhaps, shield herself. Throughout this period, her family showered her with unqualified support.

Until the ugly truth was exposed, and the true monsters in Malky's life emerged.

When Malky finally admitted that the abuser was her brother Daniel, the family's reaction was shocking, although perhaps not to Malky. Her parents alienated her, turning from her rock into strangers, terrified that exposing the truth would destroy Daniel's life along with the family's upstanding reputation.

"Everyone turned their backs on me. It's easier to sweep painful truths under the carpet. Amudim became my family," Malky grieves.

Malky's story stops here, but the saga isn't over. Her therapy is now being funded by Amudim since her parents rejected her. Sadly, while Malky's case seems extreme, it's not. Time and again, parents sacrifice one child over the other, siding with the abuser instead of the victim.

"One message we're trying to spread through Amudim is that it's time to put victims and their emotional health first. We have to stop worrying that reporting abuse will affect the abuser and instead think about helping the one whose life is irrevocably and horribly altered," says Gluck. "Protecting abuse victims, not their abusers, must be our first priority." 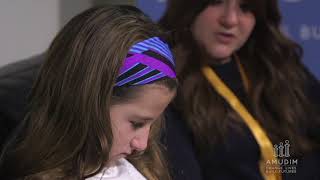