U.S. Citizen, Pascal Shakoure Charpentier, born on a U.S. military base yet to receive a fair hearing after 94 days in jail

He served his time. He grew into a thoughtful, careful, creative, and useful member of society. We need him here…

NEW YORK, NY, October 07, 2020 /24-7PressRelease/ -- More than 1,350 people have signed a petition urging Governor Andrew Cuomo to approve clemency for Pascal Charpentier. The clemency application was delivered to the Executive Clemency Review Board on October 6, 2020. Charpentier, a US citizen, has been detained by Immigration & Customs Enforcement (ICE) and is at risk of being deported to Haiti — a country of which he is not a citizen nor even visited.

Charpentier was arrested under the auspices of a 2017 executive order by President Trump that expanded the priority list of people subject to deportation to include anyone who has "committed acts that constitute a chargeable criminal offense." Charpentier was picked up by ICE for a more than 30-year-old felony. He was caught joyriding in a car belonging to a friend that had been reported stolen.

A major issue in the case is Charpentier's citizenship. He was born in Germany on a US Air Force base while his father was deployed there. His father, Edward Charpentier, a Vietnam War era veteran, took his U.S. citizenship oath while in boot camp. He served in the Air Force from 1968 - 1972. Charpentier's maternal grandfather was a US citizen, who transferred citizenship rights to his mother. Both parents appeared in immigration court on August 18, 2020, attesting to these facts in sworn testimony. The Department of Homeland Security (DHS) has documents that would prove Charpentier's citizenship but has refused to release them. His lawyer, Julie Goldberg of Goldberg & Associates petitioned Judge Dara F. Reid to sign a subpoena ordering DHS to release the documents. The judge has refused to do so.

Without this information, Charpentier's only avenue to prevent deportation is through the clemency application to Governor Cuomo.

The application for clemency includes an additional arrest from 30 years ago. When he was 18, Charpentier was convicted and sentenced to 25 years-to-life for his nonviolent unarmed association with a group involved in the 1990 New York City subway robbery and murder of Utah tourist Brian Watkins. Charpentier was unaware that any violence was about to occur and was not present at the time of the incident. He served 24-1/2 years and was released early due to his excellent record while incarcerated. He received two Bachelor of Science degrees and a Master's degree from New York Theological Seminary. He runs From Bars II Beyond, an early intervention and prevention nonprofit providing media training to at-risk youth, offering them an alternative to getting caught up in criminal activity. He is also building a production company.

A Facebook support page has been set up to keep the public informed about his campaign for freedom.

As the petition says, "He served his time. He grew into a thoughtful, careful, creative, and useful member of society. We need him here…" 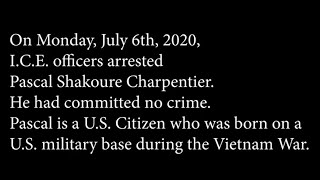 Pascal Shakoure Charpentier, a U.S. citizen, has been in Immigration & Customs Enforcement detention since July 6th.