Ephraim HaLevy At eLimmud FSU: "You Don't Get Anything for Nothing"

"Israel is becoming more connected to the world every day," noted Ephraim HaLevy, former director of the Mossad, Israel's secret service, and former ambassador to the European Union, earlier this week in a special online Limmud FSU learning session.

JERUSALEM, ISRAEL, December 30, 2020 /24-7PressRelease/ -- Offering the audience of Limmud FSU activists and members of Tzevet, Israel Defense Forces Veterans Association, his personal view on the changing Middle East and Israel's position in it, HaLevy offered a bird's eye view of the evolving nature of relations within the Middle East. The session was led by Dr. Ephraim Lapid, a brigadier-general in the IDF reserves and former IDF spokesperson.

Limmud FSU generally mounts peer-led, volunteer-based gatherings of Jewish learning that specifically reach out to Russian-speaking Jews around the world from Moscow to the US West Coast, and from Europe to Israel. Yet in a project initiated by Limmud FSU founder Chaim Chesler, co-founder Sandy Cahn, and produced by Limmud FSU acting director Natasha Chechik, since the COVID-19 lockdown made physical conferences impossible, Limmud FSU has been providing digital e-learning opportunities on Jewish, general – and coronavirus – topics. Sessions have also been arranged by volunteer organizing committees of the festivals. These online gatherings are an opportunity for Russian-speaking Jews to learn – and be – together, virtually.

Seeking to remind his audience of what intelligence gathering activities are – and what they are not – HaLevy praised the author John Le Carré, who died earlier this month and whose books presented millions with a fictional account of the "complex relations between the intelligence services' field staff and senior officials. He had a special style of writing and was one of the great writers of the 20th century," said HaLevy, "but there is a big gap between what he described in his books and the real world of spying." HaLevy himself worked in that real world of Israel's security services for over 40 years, and advanced through its ranks to serve as its ninth director, from 1998- 2002. He played a critical role in advancing peace between Israel and Jordan and was involved in establishing ties with intelligence services of countries with which Israel did not have diplomatic relations, including a number of Arab countries.

He reminded his audience that the concept of a Middle East is itself little more than 100 years old, and dates to the end of World War I and the disintegration of the Ottoman Empire, that had ruled over most of the lands that today make up the countries of the Middle East for centuries. And in that Ottoman world, czarist Russia played an important role in the latter part of the 19th century, he noted: not only is the Moslem world not at all alien to Russia, HaLevy pointed out – indeed, some 25% of the population of Russia today is Moslem and the largest mosque in Europe was inaugurated by Russian president, Vladimir Putin, in Moscow in 2015, but equally central parts of Jerusalem were once lands owned by the Russian church, particularly the so-called Russian Compound, which once housed British Mandate government offices and later, and until 1992, Israel's Supreme Court. "Russia's growing influence in today's Middle East is deliberate," he said, "for the region is historically important to Russia's leaders."

Turning from the past to the present, HaLevy commented on a series of countries in the Middle East whose relations with Israel are evolving. The seeds of the recent normalization of relations with Morocco were planted many years ago, he noted. In the 1960s, leaders of the Mossad often visited the country, and the organization even maintained staff there – while at the same time mounting secret operations inside Morocco to aid in the emigration of more than 250,000 Moroccan Jews in the early 1960s; some left legally, many illegally; the majority settled in Israel. "Today, Morocco is important within all of North Africa, the Saharan desert is of great economic potential, while the country's position, with access to both the Mediterranean Sea and the Atlantic ocean, means it has great significance for outreach to western Europe and beyond."

And turning from west to east, touching briefly on the United Arab Emirates, Qatar, Bahrain and Oman, HaLevy turned his focus to Iran.

"Israel cannot interrelate with Iran only on the issue of the development of nuclear capability," he argued. "Iran is one of three large countries in the Middle East under the influence of Russia – together with Egypt and Turkey. They are all countries with large populations, all of them have experienced revolutions, and all of them are seeking to have a regional impact. Israel cannot shape the Middle East without addressing our relations with Iran." He reminded the audience that those relations used to be very warm. "But the regime of the ayatollahs is not going to disappear, and you get nothing for free, so there has to be give and take. The end of enmity with Iran requires Israel to do something, to give something. The position of the Palestinians is critical for Iran, and it may well be that peace with our immediate neighbors will help improve relations with the regime in Teheran."

"The normalization of relations with Israel within the Middle East cannot be stopped," HaLevy concluded, "but that does not change our very real need to find a solution for coexistence with our closest neighbors, the Palestinians. That is what is really needed for a really new Middle East." 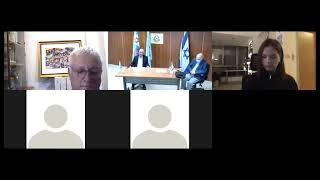