In a special event that brought together leaders of the struggle for the rights of Soviet Jews to emigrate freely, former refuseniks and Jewish world leaders, Limmud FSU remembered and honored former Secretary of State George Shultz who died recently

NEW YORK, NY, February 19, 2021 /24-7PressRelease/ -- The special event, initiated by Limmud FSU, was held in English and Russian on Monday, and was addressed by Jewish leaders who played important roles in the struggle for the right of Soviet Jews to live – and leave – as Jews, as well as by leading refuseniks and prisoners for Zion, and leaders of the Zionist movement. Individually and together the speakers reflected on the tireless struggle led by world Jewry, with the critical support of western governments and the wider public.

The comments and personal reminiscences focused on two main themes – the high standing and important achievements of Secretary Shultz as an accomplished international statesman, and his personal and professional commitment to the cause of Soviet Jewry. The degree to which there was synergy between the two themes is, perhaps, astonishing.

Limmud FSU generally mounts peer-led, volunteer-based gatherings of Jewish learning that specifically reach out to Russian-speaking Jews around the world from Moscow to the US West Coast, and from Europe to Israel. Yet in a project initiated by Limmud FSU founder Chaim Chesler, co-founder Sandy Cahn, and produced by Limmud FSU acting director Natasha Chechik, since the corona lockdown made physical conferences impossible, Limmud FSU has been providing digital elearning opportunities on Jewish, general – and coronavirus – topics. Sessions have also been arranged by volunteer organizing committees of the festivals. These online gatherings are an opportunity for Russian-speaking Jews to learn – and be – together, virtually.

"So many faces from the struggle are on the screen today," said Matthew Bronfman, Limmud FSU chair; "we owe Secretary Shultz a debt of gratitude. He promised the Jewish community that he would raise the issue of Soviet Jewry in every meeting with the Soviet government – and he kept that promise." Bronfman also recalled that his father, Edgar Bronfman, in his capacity as president of the World Jewish Congress, visited Moscow during the Reagan administration, when Shultz was serving as secretary of state, to press the Soviet authorities to allow Jews to live and leave freely. "As a world Jewish leader, my father could not have done any of this without the blessing and support of the US government. Shultz did not only care in words; he cared in deeds too."

Malcolm Hoenlein, an early leader of the Soviet Jewry struggle in USA and longtime executive vice-chair of the Conference of Presidents of Major American Jewish Organizations, called Shultz "a unique leader… a man of humility and integrity, with a deep concern and sincerity of support" for the issue of Soviet Jewry.

It was a sentiment echoed by Julius Berman, the organization's former chair, and later president of the Claims Conference; "he was the sweetest and kindest person in the world, soft spoken, extremely powerful – but modest as heck."

Shultz was, said Jewish Agency chair, Isaac Herzog, "a great American leader and statesman. He had wisdom and understood the intricacies of the world. And he was a sworn friend of Israel."

He was, said David Harris, CEO of the American Jewish Committee and formerly of the National Coalition Supporting Soviet Jewry, "a diplomat's diplomat, a humanist's humanist, a statesman's statesman, who understood the concept of 'let my people go' and was committed to it."

It was an approach to diplomacy noted also by Dorit Golender, Israel's former ambassador to Moscow, and vice president for community relations at the Genesis Philanthropy Group, "In giving Soviet foreign secretary Edward Shevardnadze a list of refuseniks, he did not only use his influence to support human rights and make a statement of the US commitment to the issue, he showed the importance of solving the issue so the civilized dialogue with USSR could continue."

This commitment found clear expression in Shultz's actions, noted Mark Levin, director of the National Conference on Soviet Jewry; "Shultz send a signal from the top that Soviet Jewry was one of the four issues that would always be on the agenda between the US and the USSR. Soviet officials understood his commitment and that of the entire USA. He is one of my heroes."

Chesler, who, in the 1980s served as the director of the Israel Public Council for Soviet Jewry, the Israeli roof organization for the public struggle for Soviet Jewry, recalled how he would always receive a call from Shultz's office before he was due to visit Israel, asking that a meeting be set up between the secretary of state and former refuseniks and prisoners. "He always went to the Soviet Union with the names of refuseniks and prisoners – and he would always update us after his meetings. While he was dealing with world peace, the issue of Soviet Jewry was a personal one for him. He had an impact on opening the gates that no one else did."

Former prisoner and prominent refusenik, Natan Sharansky, recalled how one of the first people he spoke to after his dramatic release and arrival in Israel in 1986 was Secretary Shultz. "He was both like a leader of the campaign who dealt with lists of names and ensured they were given to world leaders, and the activist who knew the names of individuals and wanted to share their lives. He knew our names and asked about us at every opportunity. He loved my wife, Avital, and he made no secret of it. He once remarked that he hoped that if he were ever in a situation like I was in, his wife would do what Avital did for me. He made a connection between high politics and the people behind the stories. His moral clarity was unbelievable."

It was his enormous personal and professional commitment to the cause of Soviet Jewry that led Limmud FSU, in November 2017, to honor George Shultz at the conference in San Francisco.

For Limmud FSU co-founder, Sandy Cahn, the event was "history in the making. There were more than 800 young Russian-speaking Jews there, many of them the children and grandchildren of those whom Secretary Shultz had helped to emigrate, but they did not know who he was. We opened the eyes of the younger generation to that history, and it helped them understand how important it is to know history. And they saw a clear-minded 97-year old, a humble man, who talked of the debt of gratitude he owes to Soviet Jewry. For him, the refuseniks showed the strength of the individual human spirit with beliefs and hopes. They showed him that if something was important, you should never give up fighting for it."

Professor Deborah Lipstadt, an expert on the Holocaust and modern antisemitism, recalled an interview Shultz gave at the end of his seven years of service as secretary of state. He was asked what the highlight of his time in office had been. The journalist clearly expected that the response would focus on an international treaty or agreement, she said, but for Shultz, that highlight was when he received a telephone call from former refusenik and prisoner of Zion, Ida Nudel, who had met Shultz at a Passover seder held in the US embassy in Moscow in 1987, to say "I'm home, I'm in Israel." "That," said Lipstadt, "was the measure of the man, of what the issue meant for him. I was privileged to have been touched by him."

Other speakers at the event included Eli Valk, a former Israel ambassador to Belarus and former refuseniks and prisoners of Zion, Silva Zalmanson and Alexander Kholmiansky.

This event has been made possible with the generous support of Genesis Philanthropy Group. 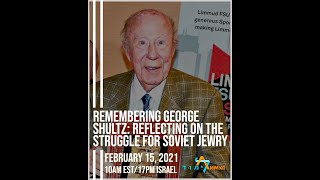