"...my goal with Paper Rock Scissors N' Stuff Wars is to explore the idea of newly developed living elements who don't know what humans are, yet they think and act like we do..."

MISSISSAUGA, ON, March 04, 2021 /24-7PressRelease/ -- A first-of-its-kind independent comic book series that morphed the popular internationally played hand game Rock-Paper-Scissors into a living calamitous planetary war is celebrating the release of its final issue with a Kickstarter campaign. The Paper Rock Scissors N' Stuff Wars #4 campaign, created by Zelpha Comics & Collectibles, began on February 28th and will run for 35 days.

After launching two previous successful Kickstarter crowdfunding campaigns for Paper Rock Scissors N' Stuff Wars #2 and #3 – with the first issue self-funded by creator Luanga Nuwame in 2016 – this quirky comic book series that chronicles a war between anthropomorphic empires will conclude with its fourth issue. Luanga Nuwame and renowned comic artist Hugh Rookwood are creating a 32-page epic battle between the kingdoms of Paper, Rock, Scissors, plus newly added living elements of Plastic, Water, Sand, the Anvil Gods, and their Glue slaves. The series is cartoonish and wacky, yet touches on serious content, so it can appeal to multiple age groups when tackling mature issues such as the foreign occupation of nations and slavery.

What sets Paper Rock Scissors N' Stuff Wars apart from other comic books, beyond its non-superhero offbeat premise of sentient inanimate objects, is the various harsh real-life themes that play out in the narrative's plot. The first issue begins with the genocide and occupation of the Papers by a Scissors kingdom with the belief it is superior to all other creatures and thus deserves to rule. The Rock kingdom is xenophobic and distrustful of anything that isn't Rock. The newly introduced Plastics are aware of all the kingdoms and they seem to be playing a long game of manipulation. And then there are the powerful Anvil Gods who hold the secrets to how life began on the planet and they feel it is their right to impose their will on all the kingdoms for the perceived 'greater good'. The Anvils also control a slave army of simple-minded Glues tasked with causing mayhem on command. Ultimately, the conflicting ideologies and desires of the various creatures and kingdoms led to the war wreaking havoc on their planet.

Writer Luanga Nuwame, who is a 43-year-old father of Jamaican and Togolese heritage, uses the series to tackle themes of ethnic hatred, power dynamics, the mindset of being a 'superior race', faith in specific higher powers, and trying to find one's place in a complicated world by way of a relatable animated story format. Artist Hugh Rookwood creates a stunning visual adventure that showcases important themes in an expressive and sometimes whimsical way. These themes are woven into a black-and-white artwork fantasy world that is targeted to teens and adults.

"With the artwork of Hugh Rookwood, my goal with Paper Rock Scissors N' Stuff Wars is to explore the idea of newly developed living elements who don't know what humans are, yet they think and act like we do in the best and worst of ways," states Nuwame. "Think about what happened when past colonial powers explored new parts of the world. Think about the racial and religious tensions still happening today worldwide. I'm putting elements of humanity into cartoon objects trying to make sense of their fractured world!"

The Kickstarter campaign for Paper Rock Scissors N' Stuff Wars #4 is currently running until April 4th, 2021. Additional information and pictures can be found on the comic's Facebook page: https://www.facebook.com/RockPaperScissorsComicBook and directly on the Kickstarter page at http://kck.st/37UWMaV

Zelpha Comics and Collectibles is a new company in the production of handmade cardboard-based novelties, toys and collectibles. Founded by Luanga Nuwame, who is also known on YouTube as the 'Homemade Game Guru' cardboard craft artist, the company also produces a line of self-published comic book properties for various age groups. The best known comic book properties the company makes are Paper Rock Scissors N' Stuff Wars and The Adventures of Little Petalianne. Zelpha Comics and Collectibles' base of operations is in Mississauga, Ontario, Canada. For more information, visit www.handmadecardboardinnovations.com 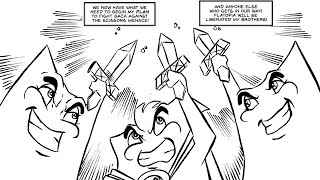