Gene Saunders Gets the Star Treatment!

Mr. Saunders utilizes a combination of technology and training to locate lost individuals

PORT ST LUCIE, FL, March 24, 2021 /24-7PressRelease/ -- Gene Saunders has participated in The Star Treatment, a prestigious video series hosted by renowned lawyer and television personality, Star Jones. This premier video series is extremely limited — Marquis Who's Who qualifies 500 listees on an annual basis for this elite service. Backed by a storied career in media that spans more than two decades, Star works closely with Marquis listees to assist with networking goals and commemorative efforts that can be shared with a worldwide audience.

Mr. Saunders, founder and CEO of Project Lifesaver International, exists to fulfill its mission of enabling public safety officials to locate quickly those who may wander and become lost due to any number of disorders, as these individuals are truly at risk and vulnerable. Star remembers when her own late grandfather first manifested symptoms of diminished capacity, due in this case to dementia. It was difficult for the family to adjust, as they were obligated to go to some extreme lengths to keep him safe. Despite this, she said, Mr. Saunders was doing much more, through his company, to protect these individuals.

The mission of helping the lost can be more difficult than it would seem. "They don't help you," said Mr. Saunders. "They don't know how to help you, because most times they don't realize they're lost." The time that it takes to locate such an individual can quickly become deadly, as there are many hazards that can befall them, such as hypothermia, exposure, or any number of factors that could affect someone likely of advanced age. "Many of these searches did not turn out well," he said, sadly. Working from the knowledge that time would never be on the rescuers' side, he met with a manufacturer and devised some radio telemetry equipment, as well as a program to help find these people quickly. The first case was a resounding success, as the lost individual was found within two minutes.

"We use radio telemetry, which is not a new technology, we just adapted it," he said. Using a transmitter wristband, which broadcasts a signal on a pre-determined frequency, lost individuals can quickly be found by trained Project Lifesaver staff, who use the signal to hone in on a precise location. In addition to being trained in the technology, Mr. Saunders emphasized that training was also needed to familiarize staff with the types of cognitive disorders that they would be assisting with. It is one thing to locate a missing person with autism, or Alzheimer's, it is entirely another matter to convince them to accompany you to safety. Through a combination of specialized equipment, training, as well as having established personal relationships with families of the vulnerable individuals in the area, staff members are able to quickly recover lost individuals and, more importantly, convince them to return unharmed. "We have found that our technology is the most reliable for what we're doing," said Mr. Saunders.

When law enforcement groups apply to the Project Lifesaver program, training begins in a multi-faceted approach, from equipment management to care management. From there, Project Lifesaver steps back into a consulting role, providing advice and assistance as needed. As the mental health and neurological fields continue to evolve, so too must Project Lifesaver's knowledge base. With that in mind, Mr. Saunders hosts a yearly conference to give some of the leaders in these fields the chance to discuss their finding with the team, bringing them up to date and giving them any useful information that could help find a person in need. Since starting, Project Lifesaver, Mr. Saunders has seen approximately 3,755 people rescued, though this number is likely higher due to inadvertent under-reporting on the parts of law enforcement. Mr. Saunders hopes that the general public will become more aware of groups like Project Lifesaver, and encourages them to contact these groups to help their loved ones. With a people-focused mission and an innovative spirit, Mr. Saunders is truly worthy of the Star Treatment. 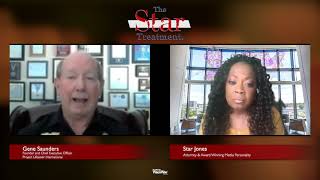