Mr. Birnbaum, an educational consultant and lawyer, sits with Star Jones to discuss his career

CHARLESTOWN, RI, April 06, 2021 /24-7PressRelease/ -- Irwin Morton Birnbaum has participated in The Star Treatment, a prestigious video series hosted by renowned lawyer and television personality, Star Jones. This premier video series is extremely limited — Marquis Who's Who qualifies 500 listees on an annual basis for this elite service. Backed by a storied career in media that spans more than two decades, Star works closely with Marquis listees to assist with networking goals and commemorative efforts that can be shared with a worldwide audience.

Mr. Birnbaum, who attributes his success to his ability to form special bonds with others, became involved in his career in the late 1950s, working for a private corporation. At that time, he was focused on building up his experience as a financial consultant. He graduated from law school in 1961, but did not begin practicing law until 1966. After his brother-in-law became a transplant surgeon, he gained a deep fascination for the world of medicine, and decided to make medical law his specialty.

Mr. Birnbaum attended Brooklyn College to become an accountant, and later studied at NYU School of Law on a part-time basis. It took him five years to earn his law degree, but he was able to successfully graduate while juggling an accounting job. He recalls being a client at one point of Martin Ginsberg, husband of late supreme court justice Ruth Bader Ginsberg. He also worked with David Kessler, who went on to become the commissioner of the FDA. "When David came to Yale, he recruited me to become the chief operating officer of the medical school," he said. That fateful decision sparked the beginning of a wonderful 20-year career that led to where he is today.

When asked about some interesting cases, Mr. Birnbaum said that rather than individual cases, he was interested in case subjects, particularly those involving civil liberties, women's rights, and medical freedoms, such as abortions. He is a fierce advocate of patient privacy, and he feels very strongly that a patient's information should be closely guarded for the purposes of protection.

According to Mr. Birnbaum, some of the most rewarding aspects of his work are the ability to push forward and explore new developments in the world of science and medicine. He is keen to ensure that the rights of the patients are being guaranteed, and that doctors do not "go overboard" in terms of the treatments they provide. In the end, he said, both the administrators and health care professionals are on the same side. They both want to provide the best possible treatment for patients.

In addition to Mr. Birnbaum's experience in law, he also has some educational experience with Yale University, teaching young people about the nature of health law, as well as his history in the field and the changes that he has witnessed throughout his lengthy career. By knowing the history of the field, students can be better prepared to deal with future changes. A holder of key institutional knowledge, Mr. Birnbaum's enthusiasm for passing his skills down makes him a truly worthy recipient of the Star Treatment. 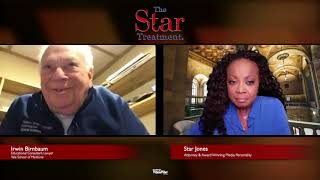