In 2017, Munich-based Agri Terra Group decided to add another segment to its business and investment portfolio: with the development of a complex of high-tech greenhouses, the company further expanded its interests in fruit and vegetable cultivation.

We are consistently continuing on our path of relying solely on equity capital, regardless of the current low-interest environment.

ASUNCIÓN, PARAGUAY, April 08, 2021 /24-7PressRelease/ -- Most recently, the complex near Paraguays capital city Asunción has become the largest of its kind in the country. The site, which is already partially operational, will have a yearly maximum capacity of 8.3 million kg (18.3 million pound) of tomatoes when completed at the end of 2021, making the company the single largest tomato producer in Paraguay. However, Agri Terra is already considering to double ist capacity as there is no end in sight for demand. In the field of producing red and yellow (bell) peppers, Agri Terra already became the largest producer in the small South American country last year.

Just recently, the company acquired more land in the same area of Nueva Italia. Among other developments planned on the new property, the most newsworthy plan concerns a brand new greenhouse complex designed to produce strawberries under ideal conditions all year long. With an initial target capacity of 4,000 tons, it would double the country's current total output. The ambitious project obeys a strategy: while current strawberry production in Paraguay only generates harvests and supply during four months of the year, Agri Terra will bet on anti-cyclical cultivation in greenhouses and bring ist produce to markets mainly during the eight months when there is otherwise no supply at all. Notably, imported strawberries from neighboring countries are only available in inferior quality (due to very long shipping routes) and tend to be pricey. During eight months of the year, Agri Terra would thus become a quasi-monopolist on the Paraguayan strawberry market. At the same time, the group is planning to invest in an agro-industrial processing plant for strawberries.

"Fresh strawberries are very popular in Paraguay. With the new project in Nueva Italia, where we are already heavily invested anyway, we intend to initially establish around 135,000 m2 (1,453,128 sq ft) of planting area in greenhouses. That allows us to easily harvest up to 4,000 tons per year, using the so-called pyramid system. When our downstream processing is completed, we will be able to even further increase this capacity. To give you an example, frozen strawberries are ideal for worldwide export, while strawberry juice is used especially in mixed juices. The possibility of producing jam, puree and dessert sauces are also on our list," explains Managing Director Carsten Pfau. Customers such as supermarkets, restaurants, bakeries and hotels are already lining up to secure quotas of Agri Terra's future strawberry production. Among them is the group's own supermarket chain called "Granja Direkt," which translates into Farm Direct and sets its focus on fresh fruits and vegetables under an organic approach. "Trust me, we don't see any problems in selling our entire strawberry production," Pfau concludes.

Much like the greenhouse complex for tomatoes and peppers, the company's strawberry facility as well will be financed without any debt. "We are consistently continuing on our path of relying solely on equity capital, regardless of the current low-interest environment" is Carsten Pfau's categorical answer to the question about debt capital and loan financing. In addition to the company's own funds, selected investors will again provide the required funding. US equity investors in particular have strongly committed to the project, complemented by smart money from Canada, Germany and Switzerland. As of late March, 31 of available 52 units have already been signed for, and a long waiting list is still attached to the order book, only paperwork pending, indicating that the investment offer will soon be sold out. "In recent years, we always placed our investment opportunities rather quickly, and demand for productive tangible assets far away from the U.S. and Europe continues to rise," Pfau says. The Covid crisis in particular brought to light how safe and sound agricultural investments really are - people always have to eat and drink, no matter under which circumstances.

Still only third place with oranges

Concerning the cultivation of citrus fruit, one oft he group's core businesses, Agri Terra still lingers in third place in Paraguay, despite ist already massive investments in this field. However, now that the fourth orange plantation is being developed, the gap between the German investor and the country's other two large producers has been significantly reduced. "After completion of our processing plant for orange juice concentrate, we will gear up again our investment strategy concerning orange plantations. If things work out as planned, we will soon become the country's largest orange producer as well" says Carsten Pfau with a tone of self-confidence. However, the goal of making Paraguay an orange exporter again, is already within reach thanks to Agri Terra's activities.

Agri Terra Group specializes in investments in agricultural projects in Paraguay and is one of the most important agricultural investors there. The company manages and operates the third largest citrus acreage in the country and by far the largest greenhouse complex for fruits and vegetables. The company is also developing one of the largest Country Clubs in South America by acreage. The founders and managing directors Carsten and Michael Pfau have been investing in Paraguay since 1993 and are regularly listed among the country's most influential entrepreneurs. They make their enormous experience and South America expertise available to interested co-investors in order to jointly generate solid returns in the emerging developing country. 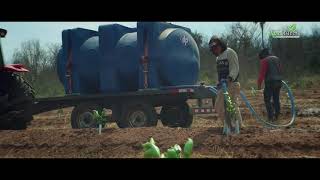 About the Agri Terra Group