World-renowned business educator, bestselling author and motivational speaker, Dr. Marshall Goldsmith, has today unveiled an exclusive, new article below entitled, "When Do You Eat the Marshmallow?"

The last year has been a challenging period for all of us, but it has also highlighted the importance of making short-term sacrifices for long-term gains. This article explores those issues.

NEW YORK, NY, July 22, 2021 /24-7PressRelease/ -- "I'm very pleased to be publishing this article today. The last year has been a challenging period for all of us, but it has also highlighted the importance of making short-term sacrifices for long-term gains. This article explores those issues and the importance of appreciating the value of delayed gratification." -Dr. Marshall Goldsmith

Millions of readers worldwide have enjoyed Marshall Goldsmith's bestselling books and acclaimed articles. He has generated significant publicity from these releases, but the written word is only a small part of the Marshall Goldsmith Story. His keynote speeches, leadership courses and internet-based offerings are known and revered all over the world. In the arena of business education and coaching, Dr. Goldsmith is the go-to guy.

Having worked with over 150 CEOs and management teams, Dr. Marshall Goldsmith has established himself as one of the top-rated providers of leadership training in the world. This is according not only to his many satisfied clients, but also to Forbes, the Wall Street Journal, Bloomberg Businessweek and countless other prominent publications and institutions worldwide. Dr. Goldsmith has shared his talent with some of the most prominent executives in the world, helping them achieve full potential for their companies and themselves. To put a number on Marshall's many successes would be a near impossibility, so it's a good thing that Marshall Goldsmith's enviable body of work exists to give us some understanding of his masterful methods and awe-inspiring results. This includes such acclaimed titles as, Work Is Love Made Visible, How Women Rise, What Got You Here Won't Get You There and Triggers.

If you were in New York City between 2018 and 2020 you may very well have seen one or more of the above titles advertised alongside Marshall's likeness in Times Square, New York City. Dr. Goldsmith has been featured as the subject of several larger-than-life advertisements on the Nasdaq MarketSite tower and the Thomson Reuters display, totaling 12 individual billboards. These locations are generally considered to be the most attractive, and certainly the most iconic advertising locations in all of Times Square—a place known for its attention-grabbing signage. This unique advertising opportunity was made possible by The Stone Register, New York's preeminent boutique advertising firm. The company's Managing Director and Co-Founder, S.W. Miliano, had this to say:

"Marshall Goldsmith has always been a household name. I've only worked with him in an agency-advertiser capacity, but I think you'd be hard pressed to find a CEO out there who hasn't heard of Dr. Goldsmith. He is the undisputed heavyweight champion of his field!"

S.W. Miliano himself has been quoted in, and recognized by Forbes on numerous occasions as a member of their esteemed Business Council for his work with The Stone Register. He is widely considered a leading authority on not only advertising and marketing, but also business management. The respect and admiration he has for Marshall Goldsmith's work has meant that the advertising CEO personally oversees every Marshall Goldsmith Times Square ad campaign from inception to execution. Mr. Miliano continues:

"Some of the most beautiful work my company has ever done has been on Marshall's impactful ad campaigns. His message is timeless and vital. In fact, it's more important now, since the pandemic, than ever before. Corporate America has emerged in a new and sometimes intimidating business climate, so people out there need someone like Dr. Goldsmith to help navigate these changes, these ebbs and flows. This is in large part why The Stone Register is doing this exclusive article series with Marshall at the center."

Throughout the summer, The Stone Register will be releasing a limited series of obscure Marshall Goldsmith content as part of its special online news series promoting the author. Some of the articles have been featured on Marshall's website, but for the most part they've never been seen before. This written series will culminate later this year in Marshall's advertising return to a Times Square that is slowly reawakening. According to The Stone Register's website, the goal is to enlighten audiences new and old with Dr. Goldsmith's wit and wisdom, hopefully providing some direction in these tumultuous times.

The flagship article in this new series is an insightful one entitled, "When Do You Eat the Marshmallow?" In it, Dr. Goldsmith examines the value of making sacrifices in the short term to yield long-term success and achievement. Read the opening paragraph below, and click the text to read the full piece on The Stone Register's website.

When Do You Eat the Marshmallow?
By Dr. Marshall Goldsmith

Years later the achievement levels of these children were studied. What was the initial conclusion?

When they became older, the children who waited for the two marshmallows were shown to have higher SAT scores, more educational achievement, and lower body mass index. These studies eventually led to Mischel's 1994 book, The Marshmallow Test: Why Self-Control Is the Engine of Success.

These later findings make common sense, rich kids - with highly educated parents - were more likely to be brought up in an environment where the rewards from delayed gratification were more obvious than poor kids with less educated parents. They were also more likely to believe that the authority figure – the experimenter – would deliver the rewards.

Much of the literature in psychology deifies the importance of delayed gratification. It is linked with all we associate with 'achievement'. Almost every self-help book is written to inspire you in your quest to attain socio-economic success and to increase your ability to reach long-term goals. We are relentlessly bombarded with the virtue of sacrificing immediate pleasure to achieve long-term results.

Another Way to Look at the Marshmallow Study

The classic marshmallow study has a clear conclusion, the research subject either eats one marshmallow now or delays immediate gratification and gets two. The implied learning is simple delayed gratification is good.

Now let us imagine that the study did not stop but was extended. After waiting the required number of minutes, the child was given a second marshmallow but then told, "If you wait a little longer, you will get a third marshmallow!" Continue Reading Here

To find out more about Dr. Marshall Goldsmith and his work and services, please visit www.MarshallGoldsmith.com 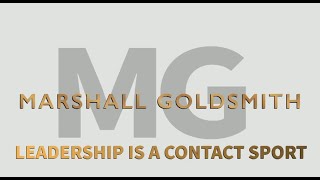