The ambitious Parsec Award-winning audio drama has styled a unique hybrid between audio drama and theatre to deliver fun and emotional intimacy for New York audiences.

"I honestly never expected the City to go for this. There's a perverse thrill in using City money to buy a weird prop like a severed head. Your tax dollars at work!"

NEW YORK, NY, October 04, 2021 /24-7PressRelease/ -- Only a month after airing its widely acclaimed second season during the pandemic, the Parsec Award-winning audio drama, THE GRAY AREA (grayareapod.com), has found new life in an altogether different medium: the world of theatre. The live show, which was made possible by a City Artist Corps grant from the New York Foundation of the Arts, will offer a rare and exciting look under the hood of audio drama -- with practical sound effects being performed on stage. But the show has been designed with theatre in mind.

"It's somewhere between how we approached recording the goofy and weird material in my apartment and the gritty emotional theatre of Eric Bogosian and Annie Baker," said Edward Champion, the Brooklyn-based showrunner and producer of the audio drama. "I've always been a great theatre lover. But I honestly never expected the City to go for this. There's a perverse thrill in using City money to buy a weird prop like a severed head. Your tax dollars at work!"

Champion will be writing and directing the stage show, just as he did the twenty-nine episodes of the audio drama. The live show will be performed on October 16, 2021 at the Gene Frankel Theatre at 24 Bond Street. The show begins at 7:00 PM and is free to the public.

"I was truly stunned that the City saw artistic merit in my little production. And I'm honoring this great privilege by making the most ambitious and fun show that I can," said Champion.

The NYFA grant, however, has caused Champion to expand his work in ways he never anticipated.

"I mean, you have me on the phone as I'm taking apart two PKE Meter toys and seeing what I can do to turn these into something interesting for the Receptionist's electromatter scanner. I'm an audio guy. All I had to do in the past was figure out the sound design with kitchen appliances and items that I found in 99 cent discount stores. I never expected to actually BUILD the thing! But it allows me to flex a few new creative muscles! The cast is super pumped about this too."

The live show will include seven stories -- five of them completely original -- that will introduce a new audience to the audio drama's award-winning blend of vivacious genre and heartfelt human tales.

The seven stories include "Meet the Receptionist," which introduces the audience to its popular alien character (played by Zack Glassman) fond of Tony Danza and hot dogs, a comedic story set in World War I that will examine gender roles and racism called "Over There," "Five Good People" -- a story that explores parallel universes and moral relativism -- and theatrical reworkings of two previously aired episodes: "The Head Doctor" and "West with the Light."

"The idea here was to expand on the elaborate mythos that we built carefully over two seasons. The stories here take place between the second and third seasons," said Champion. "But I didn't want to leave out any audience member coming into this cold, without any knowledge of the audio drama. Much like the audio drama, you can enjoy these stories on their own terms. Or you can do a deep dive by listening to all twenty-nine episodes before the stage show and finding all the connections."

An audio trailer of the live show has been attached to this press release and can be found here:

THE GRAY AREA (grayareapod.com) is a Parsec Award-winning audio drama that has aired twenty-nine episodes to date. The series is a connected anthology format open to all genres and will feature talking animals, mysteriously enthusiastic receptionists, deranged scientists, a genius writer, impostor gods, formidable business tycoons, alien invaders, a police force that cracks down on the chronically tardy, and many demons. 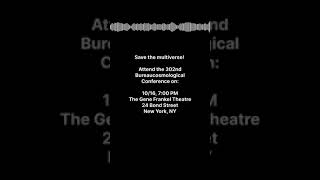