From Personal Tragedy to Opportunity for Thousands of Children with Disabilities

NEW YORK, NY, May 10, 2022 /24-7PressRelease/ -- Kalman Samuels left his university studies at the University of British Columbia to study in France between semesters; little did he know that he would not return to the University of British Columbia following his summer vacation, yet would eventually receive honorary doctorates and fellowships for his outstanding contributions to disability care and inclusion. Kalman's son, Yossi was injured as a result of a faulty medical procedure and was rendered blind and deaf among other disabilities at the age of eleven months. After traveling the world in search of diagnoses and solutions, Yossi experienced a miraculous breakthrough at the age of eight when he brilliantly learned to communicate using sign language in the palm of the hand. Inspired by their son's remarkable achievement, Kalman and his wife Malki set out on a journey to help other children and families coping with disability by establishing Shalva, an Israel-based non-profit organization.

From the humble beginnings of a local afternoon play group, Shalva became a national center serving thousands of children and adults across all age groups and sectors of Israeli society; championing a unique model that has been recognized across the globe as a leading game-changer for disability care and inclusion. Shalva has shared its therapy and support models with government and community leaders who are interested in developing disability and inclusion services in countries across the globe; including North America, South America, Europe, Asia, and the Middle East.

"Never did I believe that the pain, confusion and isolation that my family experienced would one day become a beacon of hope, peace of mind and inclusion for so many thousands of people," says Kalman Samuels. "Dreams never dreamed continue to unfold," Samuels echoes his recently published memoir.

Shalva's outstanding work and support models have earned the organization special consultative status to the United Nations and many awards by various Israeli government entities, most recently the honor of lighting a torch at Israel's national Independence Day Ceremony which is one of the country's most celebrated and honorable official recognitions.

"Kalman and Malki's enterprise has become a magnet for people from all over the country and the world, as well as establishing Israel and Jerusalem as a center that advocates inclusion and concern for human dignity," said Hili Tropper, Israel's Minister of Culture and Sport upon awarding Samuels with the distinguished honor. "The hundreds of young volunteers in the association represent a young generation and the values dedicated to grace and giving. With their brightness and endless dedication, Kalman and Malki give great hope to many families in Israel, and promote a society that accepts every person wherever he is." 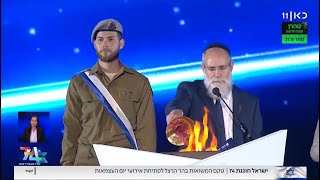