Dr. James is a pastor and the mayor of Waycross, Georgia

Looking to the future, he hopes to start more programs that improve the quality of life for citizens in his community.

WAYCROSS, GA, June 23, 2022 /24-7PressRelease/ -- Michael-Angelo James, EdD has participated in The Star Treatment, a prestigious video series hosted by renowned lawyer and television personality, Star Jones. This premier video series is extremely limited — Marquis Who's Who qualifies 500 listees on an annual basis for this elite service. Backed by a storied career in media that spans more than two decades, Star works closely with Marquis listees to assist with networking goals and commemorative efforts that can be shared with a worldwide audience.

The mayor of the city of Waycross, GA, Dr. James' skills and passion for public service have allowed him to help others grow and overcome obstacles in order to become the best people they can be. As it turned out, even the process of running for mayor was a democratic process for Dr. James. He recalls sitting in a meeting with several citizens present, and between them they were making a determination as to which of them would make the most viable political candidate. His name came up, and so he decided to run for office, with the goal of bridging the gaps and divisions that had grown to separate people.

After his election, Dr. James came to discover that being an elected official comes with a roller-coaster of public opinion. At first, he explained, "you start out like the darling of the community, and then later you seem to be the individual who is the damned of the community," because of the discrepancies between the public's expectations and what is realistically achievable. Striking that balance is perhaps one of the most difficult parts of the job.

Prior to becoming mayor, Dr. James started out as a public prosecutor, and he also has a great deal of experience as a minister. Interestingly enough, he finds that politics and ministry go hand in hand. As he pointed out, the word ministry itself means "service," but it is a different type of service than one might traditionally expect. Nevertheless, he greatly appreciated the opportunity to serve as a pastor, and in fact he still serves as a pastor, overseeing several churches as a bishop, but his job as a public servant requires an entirely different skill set as opposed to his work with the church.

As a child, Dr. James had difficulty with speech. To compensate for this hardship, he grew accustomed to writing his thoughts, rather than speaking them aloud. This experience strengthened his gift with writing to the point where he found that he was able to effectively share his thoughts and ideas with people, without being hindered by his voice. Dr. James' first book detailed his walk with God, and explained how to exercise faith. His second book dealt with leadership, as well as conflict resolution, and how to manage people without hindering them. His third book was adapted from the journals that he kept for himself starting around 1990 and ending in 2008.

Although he never considered becoming a mayor in his youth, Dr. James was encouraged by others to take a more public role, and he has since grown into it. Looking to the future, he hopes to start more programs that improve the quality of life for citizens in his community. With a mind geared toward public service, there is no doubt that Dr. James is a worthy recipient of the Star Treatment. 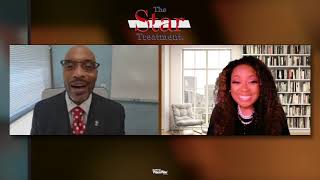