"A young man can come out of Brownsville and make something out of nothing. It gives people hope." - Pix 11 News

NEW YORK, NY, October 06, 2017 /24-7PressRelease/ -- Brooklyn based writer/director Bobby Ashley has a lot to be excited about. Ashley's drama "The Ave" has independently garnered over ten million streams on Amazon VOD. Since its 2016 debut on the platform, The Ave has delivered an insight into the lives of dynamic characters that are raw, real and resonate with its core audience.

The Ave centers on a group of young entrepreneurs who set out to open black own businesses, but fund their dreams by defrauding checks. Their aspirations are big; however, their past mistakes keep catching up with them. Will they achieve success without any consequences?

Born and raised in Brownsville, Brooklyn, Bobby Ashley, who's 24-years-old, has received accolades during the Golden Globes weekend in 2013, for his HIV-AIDS awareness drama Positive, and won the Best Short Award/TV Category for his pilot presentation Repercussions in 2014. Now a Brooklyn College graduate, Bobby's goal is to continue to push The Ave towards becoming a series pick-up by Netflix, HBO, or Amazon Studios.

The Ave cast and creator has recently sat down with Pix11 News to discuss the meaning behind the series, and why it's predominately filmed in Brownsville, Brooklyn. Zae Diggs quoted "The Ave highlights things that they don't talk about in Brownsville: generational curses, suicide, depression, peer pressure," and added that all the entertainment was "Brooklyn style."

New episodes of The Ave will be release in 2018, along with Ashley's new comedy series titled "Single Man Problems".

For publicity appearances, media inquiries or another related PR on The Ave, please contact: Bobby Ashley at bobbyashley56@gmail.com. 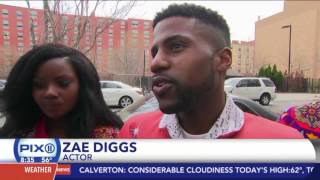 The Ave cast and crew full interview with Pix 11 News.