"I don't want to experience a repeat of this predictable and ritualistic dance. It's time to go off script. For America, please stop now." Trent Gardner -Magellan

We're too familiar with the pattern. The presidential election approaches and a sickeningly familiar rhetoric pulses below every interview. Sound bites of disinformation bombard us like the pounding of Zhangu war drums, then are overshadowed swiftly by military-like snares of accusations rising to a frenzy. Soon the ancient music of communication is beaten down into a primal marching cadence once more.

These building rhythms launch us into Magellan's hard-rocking single "War Drum (This Ain't America)." This is a fill-the-streets rock anthem for those weary of being fed the "daily spin of the constitution" served up via 24/7 media. From the opening lyrics ("Camouflaged in the red, white & blue") you know this song carries a warning... and a responsibility.

It's hard not to experience a visceral reaction.The keyboard attacks fire like automatic weapons as guitar riffs mimic wag-the-dog "dialogue." That terse voice repeating "War Drum" near the song's climax chills you with another White House wanna-be in soulless cadence.

As "War Drum" ends, the mind conjures visuals matching the cover art -- Lady Liberty lists on a blasted landscape as a lone drummer, a remnant of our revolutionary concept of freedom, rattles our consciousness before the nuclear glow.

Will we follow this war dance sheepishly down the gangway? Or will we find a way to loosen the skins and mute these drums? Remember this music as you step into the voting booth feeling disheartened, disengaged, and disenfranchised.

"Dear ubiquitous and homogenized presidential candidates from all parties, I don't want to experience a repeat of this predictable and ritualistic dance. It's time to go off script. For America, please stop now. All I can hear is the beating of yet another WAR DRUM. Keep us all safe and just go home.

I want to be perfectly clear. I have no problem with America taking necessary military actions, but with our kids and families out there doing the job, please.. let's be smart about how often we really NEED to do it. That seems like a pretty reasonable position..."

Slip on some headphones to feel surrounded by Trent Gardner's call to arms which hooks your psyche with a powerful plea for common sense. A full song preview can be heard at http://bit.ly/Magellan_WarDrum or the band's homepage at http://magellansongs.com

Magellan's newest single, "War Drum (This Ain't America)" can be purchased from Apple's iTunes or Amazon Mp3. Official media representatives may obtain a review copy by sending an email to [email protected]. For more information you can visit Magellan on the web at http://magellansongs.com.

Given their embrace of technology -- endless layers of keyboards and drums -- they insist on the "rock" side of things, with big churning guitars and bass lines. Lyrically, their themes are of the classic human condition and the irony of living in the 21st century. 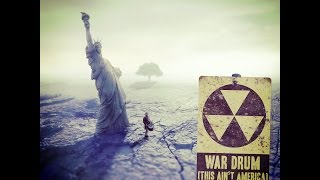