The ultimate Offshore Sailing Challenge & Historic Research Exploration to the edge of the world officially supported by the King of Norway and the Governments of Canada, Germany, Italy and the United Kingdom.

Summary
The International Expedition ARCTIC OCEAN RAPTOR under the leadership of the Global Offshore Sailing Team and the command of Jochen Werne will depart on July 24, 2016 from Longyearbyen, Svalbard to sail up to one of the most Northern partially ice-free places of this planet remembering all sailors who bravely explored and fought in this fragile and dangerous environment. The aim of the expedition is to provide a platform of intercultural and interdisciplinary exchange for Arctic enthusiasts such as historians, scientists, sailors, NGO'sl or associations.

The goal will be reached by focussing on the following topics:
1. Historic Research: During the first leg of its expedition "Arctic Ocean Raptor" (AOR), the Global Offshore Sailing Team will be sailing in the tradition of a number of past and well renown Arctic discoverers and researchers.
2. Environmental Awareness & Offshore Sailing: Sailing to 81 Degrees North - one of the most northern reachable, partially ice-free points on Planet Earth. Public awareness about the real meltdown of pack ice in Arctic summers will be raised by sailing with a fiberglass sailing yacht to a point just 540 nautical miles or 1.000km away from the North Pole.
3. Commemoration: 75th Anniversary: Commemoration of all seamen of all nations who fought in the 2nd World War Arctic Battle during the time of the Arctic Convoys

Details
by Admiral the Lord Boyce- Patron of Expedition Arctic Ocean Raptor
The Arctic Ocean is not only one of the most spectacular natural habitats on this planet, but also one of the most challenging seas to sail on. Over centuries brave men and women from many different nations have crossed this ocean: explorers, fishermen, researchers, Navy and Merchant mariners and sailors. Maybe all their voyages had a different objective, but they always had one particular thing in common - it was a voyage to the extreme: freezing cold temperatures combined with high storm probability, strong frequency of fog and the permanent danger of ice encounters.

During the 2nd World War men and women were sent to this sea area to fight a battle of awful intensity in the years between 1941 and 1945, the years of the 'Arctic Convoys'. In total 78 convoys, assembled on the East coast of North America, Iceland and at Loch Ewe in Scotland, sailed to Arkhangelsk and Murmansk and back. They involved some 1400 allied merchant ships - escorted by the Royal Navy, Royal Canadian Navy and US Navy - delivering supplies to the Soviet Union under the Lend-Lease program. German surface, submarine and air forces attempted to disrupt these convoy operations to prevent the unharmed arrival of their essential cargoes to the ports and, consequently, to the contested frontline. It was a brutal sea battle where thousands of Allied and German seamen and airmen lost their lives.

Without question, any person who is prepared to give his life in the service of his country and for the protection of others should be remembered. Expedition Arctic Ocean Raptor's objective is that the memory of these brave women and men never fades or is allowed to be tarnished in any way. Maybe it is one of the first times where such an initiative surpasses any national thinking. It starts at the heart of what all these men and women we remember have been - sailors. Comradeship on sea goes far beyond any border. It is about respect, honour and duty; about humility and humanity.

Carefully bearing all this in mind, the international team of Expedition Arctic Ocean Raptor, composed of British, German, Italian, Slovenian, Spanish and US sailors, will navigate in a 47ft sailing yacht to those same Arctic waters. This expedition will be supported by associations around the globe and friends also from Belgium, France, Norway and Russia. The overarching goal of this sea and shore based Expedition is to contribute to keeping alive the memories of all those brave souls who operated in the Arctic Ocean on both sides, and especially those who paid the ultimate sacrifice, during that time of conflict in the 2nd World War.

Peter Nixon, Chairman of the Channel Dash Association, who established the contact with the Global Offshore Sailing Team, once summarized it perfectly with the words: " ... working so hard to bring history back to everyone's attention and recognizing the many great acts of courage performed on our behalf by men and women of all sides during a period of conflict. ... It is not about winners or losers. ... The world is a wonderful place to live because it is made up of many different, but beautiful countries.... We should be proud of this fact. Equally, we should not be ashamed of our past, nor should we glorify it, for it was our past which created what we are today."

This is what Expedition Arctic Ocean Raptor is all about.

Please feel invited becoming part of this initiative by writing to the team or posting on the website, connecting to the partners and associations which are part of this unique venture.

The Global Offshore Sailing Team, an international group of dedicated sailors comprised of members from all over the world including the United States, Great Britain, Spain, Italy, Germany, Slovenia, France and Greece.

The Global Offshore Sailing Team which navigates on oceans worldwide and in which many teammates have naval backgrounds, has made it a priority to keep naval traditions alive and to use expeditions as historic research platforms. Recent expeditions include "Arctic Ocean Predator" where the team sailed from Tromso into the Arctic Ocean and to Svalbard in order to explore and experience the circumstances under which small weather units worked during their duty on these isolated arctic islands in World War II. The same with Expedition "Cerberus", where, in conjunction with the British Channel Dash Association, the German Association for Marine and Naval History and supported by the Royal Navy and the German Navy, we followed the route of 1942's Operation Cerberus from Brest to Kiel.

This international team believes it is important to visit the places where history happened, to not only to understand history better, but to remember the events that influenced the world we live in today.

The goal of GOST's expeditions is always to try to get a sense of the background and the struggles of the events happened at sea. By doing this we hope to remember all the brave seamen who served their countries on all sides during time of conflict in the world. 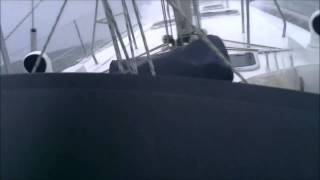