Experience the "Ghosts of England: On a Medium's Vacation" in a New Book

Mediums can't "turn off" their abilities - even on vacation!

I explored royal palaces and spent the night in haunted castles. I encountered the ghosts of historical figures including a queen, a prince, and a nobleman!

WASHINGTON, DC, March 12, 2018 /24-7PressRelease/ -- What happens when a medium goes on vacation? Can a medium simply switch off their ability at will? Well...not exactly. In his new book, Rob Gutro, Amazon best-selling paranormal author, medium and paranormal investigator introduces readers to an amazing array of ghosts he encountered during his vacations in England.

"In my book, called "Ghosts of England: On a Medium's Vacation," you will read about my experiences on two separate trips to the United Kingdom," Gutro said. England's rich history and many epic battles have caused an over-abundance of residual emotional energy. "Everywhere I traveled, I had a paranormal experience. I explored royal palaces and spent the night in haunted castles. I encountered the ghosts of historical figures including a queen, a prince, and a nobleman; and several ghosts even shared their pain of death experience with me."

On one occasion, the doppelganger of a loved one provided directions when he became lost while driving in the countryside due to a malfunctioning GPS. But not all of his encounters were of the human variety: there was also a very special visit from a canine ghost. That was appropriate because Gutro wrote two books on "Pets and the Afterlife."

Rob's first two books are about human ghosts and spirits, called "Ghosts and Spirits" and "Lessons Learned from Talking to the Dead." He is the first in the paranormal field to make the distinction between earthbound ghosts and spirits who have crossed over. He has responded to inquiries about pets who passed from around the world.

This "Ghosts of England: On a Medium's Vacation" book is intended to be more than just a collection of personal ghost stories. In addition to relating his ghostly encounters, he also included a short narrative history of the places where the experiences occurred. After all, knowing the history of a place is key to understanding why a ghost has decided to stay behind.

Rob maintains a weekly blog, Facebook and Twitter pages, where he writes about paranormal topics, and where people can share their stories or find other resources on the paranormal. The new book and his other books "Pets and the Afterlife," "Lessons Learned from Talking to the Dead" are available in paperback and E-book, on Amazon.com and other outlets at: http://tinyurl.com/hp92st7. Published by CreateSpace, Inc.

Rob Gutro has been featured in the Washington Post, MSNBC, WBZ Newsradio Boston, "Coast to Coast AM" syndicated radio with George Noory, Paranormal TV's "Do You Believe," Paranormal Underground Magazine and U.S., U.K. and Ireland paranormal radio programs such as Unknown Paranormal Radio, Ghost Chronicles Radio, the Haunted Syndicate Pararadio Show and many others. See his website for other appearances and interviews.

Rob Gutro is an author, paranormal investigator and medium with Inspired Ghost Tracking of Maryland. Since he was a child he could receive messages from ghosts or spirits (who have crossed over). *He wrote the books "Pets and the Afterlife," "Pets and the Afterlife 2," "Ghosts and Spirits" and "Lessons Learned from Talking to the Dead" to teach others how ghosts and Spirits communicate with the living and to give proof of the afterlife. As a scientist, he also provides some scientific explanations about how energy is the baseline for the afterlife and the medium that entities use to communicate. 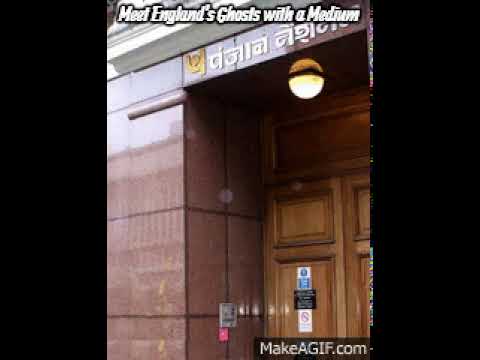 "The Ghost Near Guild Hall" from "Ghosts of England: On a Medium's Vacation," a new book by Author/Medium Rob Gutro.