The Band's critically-acclaimed LP, Back to the Shack, delights fans Worldwide and is featured on Spotify, National and International Radio Networks.

" ... a kick in the guts, like John Hiatt channeling Bobby Blue Bland punched up by Southside Johnny and the Asbury Jukes with the Tower of Power horn section sittin' in." No Depression

LOS ANGELES, CA, June 12, 2017 /24-7PressRelease/ -- The legendary classic R&B and Soul band, Jack Mack & The Heart Attack have earned a 35-year track record of global success in touring, performing, movie and television soundtracks. To add to the growing list of accomplishments, the band's most recent LP, Back to the Shack (SSR Freeroll Records), has been honored with a nomination for Best Independent Blues Contemporary CD by the Independent Blues Awards.

The Independent Blues Awards is to celebrate the diversity and power of the music created by those artists who acknowledge their inspiration and roots are in the blues. These artists are touring and creating new original music, taking their inspiration from the blues, but in the true tradition of the genre, they are redefining its future.

"What a great set Jack Mack & the Heart Attack Horns put together here. From jump till the final note this album is nothing short of astounding. If you want to get up and groove, this is definitely the record for you. (It's) sure to please the most discerning Soul & Blues aficionado. Simply put: it's damn good!" Cleve Baker - Confessing the Blues

Jack Mack has a history of more then three decades as one of America's most dynamic and authentic soul bands. They've circled the globe performing concerts, clubs, festivals and some of the world's most outrageous private affairs. Their individual style of smokin' R&B /Soul music, is inspired by the legendary artists that made up the sounds of Memphis Stax Volt, Muscle Shoals, Motown, Philly and James Brown. 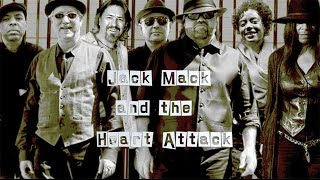