"If You're Pregnant with Your First Baby and You Want to Avoid A Cesarean Section, You Should be Induced No Later Than 39 Weeks! Babies do not need 40 weeks!"

MESA, AZ, March 15, 2018 /24-7PressRelease/ -- In ground breaking research, the National Institute of Child Health and Human Development (NICHD) recently released a new study questioning one of the most core tenants of Obstetrical Practice in the United States today. The randomized, prospective study involving more than 6000 births over three years seems to prove that the definitive factor in whether a woman will deliver her baby vaginally or by cesarean section is the weight of the baby. This stands in contrast to decades of Obstetrical education which clearly believed that the cervical dilation, or how ripe a cervix is, was the real determinant. (The cervix is the opening of the womb into the birth canal.)

"This really changes everything when planning the timing of delivery," said Dr. Greg J. Marchand, a leading OBGYN in Mesa, Arizona. "Whereas it was previously standard to just wait for labor whenever it would occur, there is no denying this very high level of scientific evidence. If you're pregnant with your first baby, and you want to have your baby vaginally, you should be induced no later than 39 weeks. For years, all Obstetricians, certainly including myself, have been counselling our patients that they should wait for labor. At least for first time mothers, this is now clearly not the best idea."

Cervical dilation or "ripeness", refers to how open, or how soft the cervix is. Up until this point many Obstetricians would use this solely as the determinant for when to induce labor. The study was published at the annual meeting of Society for Maternal Fetal Medicine this last month in Dallas, Texas. It was sponsored by the National Institute of Health and prospectively reviewed the outcome of greater than 6000 births of first time mothers. About half of those mothers were scheduled for induction at 39 weeks, the other half were left to go into labor naturally whenever it would come. The surprising outcome was a 16% decrease in cesarean section in the women in the electively induced arm of the study. Also the electively induced group has lower rates of high blood pressure and pre-eclampsia (A disease of pregnancy.) The babies born to the electively induced babies also had a lower incidence of respiratory problems, and overall needed help breathing less often than the babies in the "natural labor" arm.

Dr. Marchand went on to explain that this research will greatly change the way doctors counsel their pregnant patients at time of delivery, and that it will result in many more women being induced at 39 weeks gestation.

An abstract of the study is freely available on the website of the American Journal of Obstetrics and Gynecology: http://www.ajog.org/article/S0002-9378(17)32491-2/pdf

Dr. Marchand is recognized internationally as a pioneer in developing laparoscopic techniques, as well as an expert minimally invasive surgeon and teaching surgeon. Dr. Marchand was recently honored with a World Record for removing a 17cm Malignant tumor using a special laparoscopic cancer staging technique he invented. Dr. Marchand was also one half of the team that was recognized by the Guinness Book of World Records(TM) for removing a seven pound uterus without needing to cut open the patient. Dr. Marchand was the first surgeon in Arizona to receive the "Master Surgeon" designation from the Surgical Review Corporation (formerly sponsored by AAGL.) Dr. Marchand is also currently one only a few accredited Master Surgeon in Minimally Invasive Gynecology in the USA. In addition, Dr. Marchand is one of the few OBGYN's in the country to be a fellow of both ACOG (American College of Obstetrics and Gynecology) and ACS (American College of Surgeons.) When he is not in the operating room, Dr. Marchand enjoys low carb living and chasing around his five year old son, Sebastian. 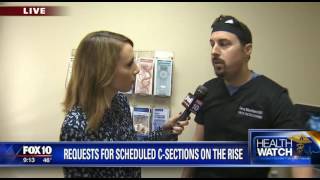 Dr. Marchand talking with Fox 1O News Arizona Morning discussing the risks and benefits of having a "designer C-section"