One Unique Car Mount with Automatic Operation Is Released By Esorun

Smart Car Mount Mimosa by Esorun, with single-handed operation, is launched at the CES Fair 2018

Compared to existing car phone mounts, the easy-to-use Mimosa is a game changer. Locking or unlocking a phone is an automatic operation via its built-in infrared and touch switch, Qi wireless added

LAS VEGAS, NV, January 09, 2018 /24-7PressRelease/ -- Esorun Tech Co. Ltd holds the patent for the Smart Car Mount Mimosa, a car phone holder with Qi wireless charging, and will launch it at the 2018 CES Fair in Las Vegas (January 9-12, 2018). Esorun has an 18-square-meter booth (number 63617) in the hall of LVCC South Plaza. The Qi standard uses inductive charging and is currently incorporated into over 100 smartphones and tablets, including the iPhone 8.

Compared to existing car phone mounts, the easy-to-use Mimosa is a game changer; mounting a phone on it is a single-handed operation with automatic locking and unlocking. Placing the phone on the Mimosa automatically triggers an infrared button that locks the phone tightly in place. Removing the phone is also simple; the driver just needs to hold the top of the phone, which will then be instantly released.

The Mimosa smart phone mount makes it simple for any driver to secure their phone, allowing safe, 'hands-free' conversations and ensuring that the driver can focus on the road, not on securing his or her phone. The Mimosa will be available to the public at the beginning of March 2018 at a suggested retail price of just $39 for the standard Mimosa and $79 for the Mimosa with Qi wireless charging. Drivers eager to obtain a Mimosa even earlier can do so, while also earning sizable discounts, if they support its Indiegogo campaign. 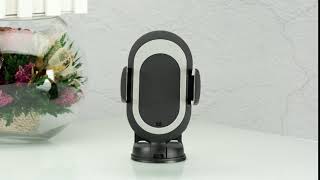 Mimosa is the best car mount with its unique feature of Automatic locking and unlocking, Qi wireless charging added.