THE AMERICAN SOLDIER Paints War, PTSD and Honors our Veterans this Memorial Weekend in Austin, Texas

"...most amazing thing I have ever seen on stage. This play is a voice for veterans!" - Veteran of Iraq & Afghanistan, Purple Heart Recipient 2014

AUSTIN, TX, May 18, 2017 /24-7PressRelease/ -- Douglas Taurel honors veterans and their families by performing his powerful and critically acclaimed Off Broadway solo show THE AMERICAN SOLDIER at the EMMA S. BARRIENTOS MEXICAN AMERICAN CULTURAL CENTER in Austin, Texas on Memorial Weekend, May 25th, May 26th & May 27th, 2017.

Based on factual accounts and actual letters written by veterans and their family members from the American Revolution all the way through current day Afghanistan conflict. It honors and explores the internal struggles that veterans and their families face when returning home from combat. THE AMERICAN SOLDIER performed Off Broadway, The Kennedy Center, it was nominated for an Amnesty International Award, earned 4 stars and the Edinburgh Festival Fringe and will be performing at the Library of Congress in the fall.

This Memorial weekend, in 55-minutes, enhanced by an interplay of sound and lights, Taurel enters into the personas of 14 veterans and their family members, telling their story of courage and sacrifice. THE AMERICAN SOLDIER exposes their flaws and their scars with both darkness and humor, and honors their incredible commitment for our freedoms. THE AMERICAN SOLDIER is a journey through the American story.

Taurel explained, "This is a true work of passion and I deeply hope that audiences will go away with a deeper appreciation of the tremendous sacrifice our servicemen and servicewomen, and their families, have made for our country. I feel that the intense sacrifices that veterans and their families have made can never have enough awareness.."

"Onstage Taurel commits totally to his characters...flawlessly and powerful"
- The Huffington Post

"...most amazing thing I have ever seen on stage. This play is a voice for veterans."
- Marc C, Veteran of Iraq & Afghanistan, Purple Heart Recipient 2014

"I think what you have created is so wonderful and so important that it tells the story of all of our veterans from all of our conflicts. I was so overwhelmed and moved..."
- Rose O, Vietnam Army Nurse, United State's Agency for International Development, 1967 - 1969

The play is directed by Padraic Lillis who was recently named to the Indie Theater Hall of Fame and Indie Theater Person of the Year in New York.

Learn more about The American Soldier and hear audience and veterans testimonials by visiting www.TheAmericanSoldierSoloShow.com

This is the TRAILER to the show: http://bit.ly/2TrailerAMS 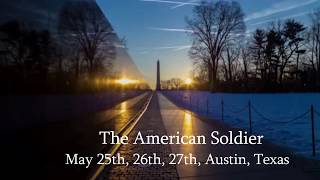