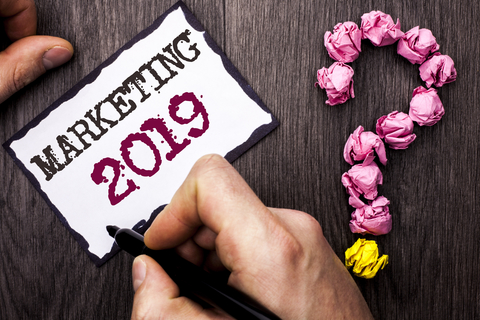 Every year there are new predictions for what marketing will bring us. Toward the end of December, we start to see the articles come out with expert thoughts and information from the field. This year is no different, and at 24-7 Press Release Newswire, we have gathered some information to pass along to you for your reading pleasure. Let's get started!

Smart Audio Systems
By now you have heard the advertisements (Alexa) or witnessed them first-hand about ‘smart audio devices.' For those that have purchased a new vehicle within the last eight years, you are probably familiar with voice commands. Smart audio systems are now outside the car and have made their way into homes, and the popularity is ramping up swiftly with the most popular device being Amazon's Alexa.

These devices are becoming so popular that Gartner is predicting 30% of searches will be through voice within the next two years. It is also interesting to note that smart speakers from Amazon currently reach 15% of homes within the United States and that the shipment of these devices has increased over 135%. More interestingly (particularly if you are a business owner), 28% of smart speaker owners have made purchases via voice. Of that 28 %, 84% have been satisfied with their purchase.

The reason for the surge in popularity is fairly obvious as it removes the hurdle of awkward typing (and autocorrect for those with clumsy fingers on small devices) and navigation (particularly evident for small screen devices). Combine this with top quality voice recognition technologies, and you have a recipe for success.

Although the general public may not be comfortable with the thought of big companies having the ability to listen in on our conversations, people are beginning to overlook this as technology makes life more comfortable.

What does this mean for businesses and marketing experts? You need to start paying attention and figure out how you can integrate your product, service or advertising with this technology. How could the general public use it to find you or your service? Like content marketing, press releases and social media it is not a fad and will not be going away.

User Data and GDPR
In the first half of May 2018, the European Parliament and Council of the European Union came out with new policies and laws around data protection regulation. In short, with a quote from Wikipedia, "The General Data Protection Regulation (EU) 2016/679 ("GDPR") is a regulation in EU law on data protection and privacy for all individuals within the European Union (EU) and the European Economic Area (EEA). It also addresses the export of personal data outside the EU and EEA areas. The GDPR aims primarily to give control to individuals over their data and to simplify the regulatory environment for international business by unifying the regulation within the EU." If you would like more information about this, you can check it out on Wikipedia.

So what does this mean for marketers and big data? It means marketers will now need to look toward first-party data instead of relying on third-party data, like that from social media platforms. Local policies and laws may likely come into play making third-party data less accessible, potentially affecting the efficiency of ad delivery.

Changes in Social Media
It has already been over a decade since social media took to the scene. It emerged as a tool that would engage wonderful, informational conversations and sharing of useful information. Of course, back then it was a real human 'voice' that also had a personality that could draw trust and customers, ultimately translating to increased sales.

Like SEO, social media didn't take long to go to the dark side where it started to become a depository for content marketing and a place where real people were slowly being replaced by ‘smart bots.' Don't get us wrong; content marketing is still important. However, there needs to be a strategy with your content, social media, blog and press release content. In some companies, social media has been taken over by IT (because of automation). We are going to see this taken back by marketing and given back to a real caring human that can create trustworthy connections demonstrating emotion and understanding, instead of an automated general response.

Word of Mouth Strategies
What strategies do you have or have you had to create interest in your business for your customers? If you haven't done much, you may want to consider taking a page out of DoubleTree Hotel's book. They created a campaign called "warm cookie welcome" complete with digital and out-of-home efforts combined with a social media contest to encourage a more welcoming world, according to a press release made available to Marketing Dive. The promotion, based on social media integration provided four winners two free nights in one of the DoubTree's more than 500 locations hotel. That is something that would create word of mouth! Think about how many times you have asked someone for a recommendation.

Press Releases & Content Marketing PR
Press release services, like 24-7 Press Release & PR Newswire continue to be a mainstay in many marketers' toolkits. A press release can build trust with journalists, who may then take your story or information and republish it in a magazine, trade publication or newspaper, potentially creating immense exposure. As long as the writer remains true to their roots, engages their audience (journalists, bloggers, etc.), sticks to the point and does not embellish their story, the press release has a chance to create wonderful online exposure. We have witnessed some of these success stories at 24-7 Press Release Newswire with just a couple of examples over the last eight months.

US Navy Veterans Mesothelioma Advocate Now Urges a Navy Veteran in Any State with Mesothelioma to Call for Direct Access to The Nation's Most Capable Lawyers Who Deliver Top Compensation Settlements – This story has received well more than 500 social shares and over a quarter million headline impressions.

VVKB Developed Portable Parking Heater and Will Looking for Global Distributors – A company from Deleware with a press release about portable parking heaters, receiving nearly 300 social shares and thousands of views.

It has not been unheard of for some stories to receive well more than 100,000 views with millions of headline impressions because a story has gone viral. At $139 for a press release, that is not a bad deal and also demonstrates the powerful visibility a press release can unleash. It is important to note this is not the norm, but the potential is there.

UpTick with LinkedIn
With headlines like "Distrust of social media is dragging traditional journalism down", Embracing social media in an age of distrust and most recently, New Study Finds Distrust in Social Networks is Rising [Infographic] it is fairly safe to see that levels of trust in the world of social media are dwindling. When you combine that with Facebook being in the news about privacy concerns there is potential, this could create some obstacles for Facebook advertisers.

With all that said, one platform that has remained steady and continued to grow for businesses is LinkedIn. They continue to maintain trust amongst their user base and have grown to be a much more useful tool than from when they first started to be known a great place to have your resume. We have also found LinkedIn a great place to share your press releases after publication.

It should go without saying that the year ahead will certainly not be boring with so many changes in the world of marketing. Striking a balance between them all can also be a challenge, however, isn't that why you signed up to be in marketing?