Get ready to take it all in and start the New Year off with a bang! The final season of the award-winning drama series, HUSTLING.

NEW YORK, NY, December 31, 2013 /24-7PressRelease/ -- Sebastian La Cause, the multi-faceted actor, known for his work on Broadway and most recently in the Netflix original Orange Is The New Black, Homeland and the critically acclaimed indie-feature Keep The Lights On will release the first four episodes of his award winning drama series Hustling, on December 31, 2013. The episodes can be found on YouTube at, www.HustlingTheWebSeries.com. This third and final season will have nine episodes and is produced by Actorman Entertainment. La Cause also serves as writer and director.

SYNOPSIS:
Hustling follows Ryan Crosby (La Cause) a male escort/adult film star who hits forty and realizes his life is not what he envisioned. He struggles with how to initiate change and uncovers a passion for cooking. With some tough love from his land lady (Rubin-Vega) and the help of a chef (McCullouch) who teaches him the ins and outs of fine cuisine, Crosby is set off on the path to transformation - which is filled with sex romps, peculiar situations and constant reminders of the world he's trying to leave behind. The series explores how using sex as a transaction can create a false sense of control that once gone will leave you hustling to pick up the pieces and how in the end we are all struggling to live better lives.

The fans of this edgy dramedy and its nearly two million views would certainly agree. Hustling, launched it's first season in November of 2011. The steamer teaser had La Cause sporting a pair of white briefs, leaving little to the imagination but it was the compelling story line and engaging characters that kept fans begging for more and clamoring for additional seasons. Reaching out to the fans for help La Cause raised funds for the second and third seasons via Kickstarter and picked up cinematographer Nathaniel Kramer (Where Have All The Mermaids Gone, In The Shadow Of The Water Tower) to join the creative team. Season two did not disappoint and the show was nominated for seven Indie Series Awards - BEST ACTOR (La Cause), BEST ACTRESS (Jessica Press), BEST SUPPORTING ACTRESS (Daphne Rubin-Vega), BEST ENSEMBLE (Drama), BEST WRITING, BEST SOUNDTRACK, BEST SERIES (Drama). The series walked away with a second consecutive BEST ACTOR award for La Cause and BEST ENSEMBLE (Drama). The series was also selected as a 2013 Webby Award Honoree in the drama category. Watch season one and two at www.hustlingthewebseries.com. 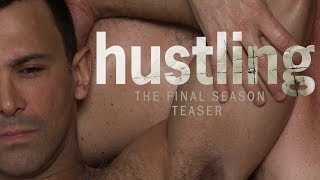 First look into the third season of the award-winning series HUSTLING.