Sashi Hot Pickles, a Caribbean pickle recipe with many health benefits. Online customers can now buy this unique blend of pickled peppers from a start-up company.

One source of inspiration for Sashi Hot Pickles was the Caribbean custom of eating pickled foods, such as cabbage, carrot, and scott bonnet peppers. Sashi Hot Pickles consist of a mixture of peppers and seasonings that draw out the flavors of the peppers. The pickles' producers developed the recipe at their home kitchen, after undergoing extensive testing and revisions, Sashi Hot Pickles are now ready to be introduced to the public.

Another source of inspiration for the produce was the founders' commitment to a healthier lifestyle, so they choosed the ingredients based on their health benefits. The ingredients are organic Habanero, Chili peppers and Jalapeno; sea salt, organic olive oil, and organic apple cider vinegar. The pickles have no artificial preservatives, and are free from potassium sorbate and potassium bisulfate.

Peppers are naturally rich in multiple B vitamins, vitamin C, vitamin A, and dietary fiber. Some of their antioxidants are lutein, zeaxanthin, lycopene and beta-carotene. They also have many potential health benefits, including lowering cholesterol level, suppressing harmful inflammation, and reducing pressure on sinuses. The active ingredient believed to provide many of these benefits is capsaicin, which also supplies the heat in hot peppers. The heat from capsaicin can lead to a faster metabolism, leading to a higher calorie burn and the potential for weight loss.

Though the pickles have Caribbean flavors, consumers can eat them as a side or condiment with any kind of food, such as pasta, pizza, tacos, veggie burgers and sandwiches. Sashi Hot Pickles are now available in 8 and 16-ounce jars in regular and mild varieties on Kickstarter, a funding platform from which entrepreneurs can seek investors to back up their creative projects.

Sashi Hot Pickles offers twelve rewards tiers to backers with pledges starting from $ 1. For more information and to back up this project, please visit the Sashi Hot Pickles Project on Kickstarter, http://kck.st/1gcWF5v. With its public product launch and your help, Sashi Hot Pickles aims to fulfill its first financial goals soon.

Additional information on Sashi Hot Pickles and recent updates are available on the company's Facebook page, Sashi Hot Pickles, and on Twitter @sashihotpickles.com. You may also email them at [email protected] for direct queries. 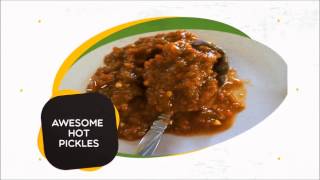