The free-to-play game available for iPad on the App Store.

The main idea of this game is 'casual' fantasy RPG to be played like nothing else before on the App Store. There are plenty of small MOBAs on iOS these days. But are they truly mobile-centric? Dragorena real-time PvP game is the answer. Unique gameplay, super easy controls, cartoonish but yet fairly detailed 3D graphics make Dragorena really comfortable and addictive mobile game.

Now, Appublica, an independent developer of mobile games, announced that Dragorena 1.0 is available for free for iOS 6.0 or higher on the App Store in USA, Canada and Mexico. The availability in other countries is coming up soon. The game offers short but extremely dynamic sessions about 1 minute each with lots of different tactics, spells, mobs, upgrades and other exciting features. User Interface minimalism allows easily to pick up and play Dragorena 1.0 for any skill level enjoying the game as its best.

In-app purchases, starting at $0.99, allow users to buy gems for dragons' improvements. But, players are also able to collect virtual currency in battles. Fight modes are regular and premium (for X2 experience). Deep SNS integration and Leaderboards make the game truly social. Many additional features are planned for the near future, including new dragons, match modes, spells, power-ups etc.

Dragorena 1.0 includes a wide range of updated features:
- 4 initial elemental dragons and arenas to master;
- 4 types of elemental experience to gain;
- 5 sessions in a row with cooldown;
- 5 unique magic spells for each dragon;
- 10 types of mana and armor;
- 5 in-fight power-ups;
- lots of different mobs and obstacles;
- about 50 upgrades;
- Facebook and Twitter integration.

"We love Dragorena and would like to share it with all RPG addicts. We also believe once try Dragorena 1.0, it won't leave anyone indifferent," said Appublica team.

About Appublica
Established in 2012 and headquartered in London, UK, Appublica is an independent development studio of mobile games. The company's initial offering is Military Draco for iOS. More information can be found online at www.appublica.com or follow them on Twitter @Appublica. 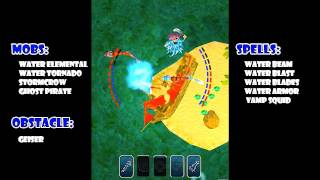