Having launched on August 18th, the premier over-the-fireplace TV mount with up and down movement, reached its goal of $25,000 within its first 30 minutes on the crowd-funding platform.

After running a simple Google Ad Words campaign, in a matter of weeks I sold out of the 100, high-cost units I had manufactured. That's where Kickstarter can help garner pre-orders on a grander scale.

SAN DIEGO, CA, August 27, 2014 /24-7PressRelease/ -- Sore necks and glare due to flat screen TV's mounted too high on the wall are now a thing of the past. MantelMount (www.MantelMount.com), a new kind of TV mount, allows anyone to easily pull a flat screen TV down off the wall, suspend it at eye-level in front of the fireplace & swivel it left or right. This easy-to-install TV mount, launched its Kickstarter campaign on August 18th, and has since surpassed its initial goal of $25,000 by 345%. With several hundred units already manufactured and available, MantelMount plans to send out its first shipment immediately after ending its 30-day campaign on Kickstarter, having already met its goal.

As of yesterday morning, the Mantel Mount Kickstarter campaign has 352 "backers" who have funded it with $86,257 and 21 days remaining in the campaign.

The inventor of MantelMount, an avid sports and movie viewer, came up with the concept after suffering from neck pain caused by watching his flat screen high above the fireplace. He set out to address that and other issues with flat screen wall mounts he'd seen on the market; particularly that there was little to no movement or flexibility to maneuver the mount to an eye-level position for the perfect view, regardless of where the viewer was sitting.

"After running a simple Google Ad Words campaign, in a matter of weeks I sold out of the 100, high-cost units I had manufactured. That's where Kickstarter can help garner pre-orders on a grander scale," said Inventor Brian N.

MantelMount was aiming to raise at least $25K in crowd-funding to increase production and lower manufacturing costs. Pledges begin at $5 and range in amount, each with guaranteed deliverables, once the goal is achieved. "Backers" have the option to pledge for a single MantelMount unit, starting at $199 and ranging to $249, depending on the amount of pledges offered at each level.

For more information on Mantel Mount or to pledge for the product, visit the website at www.MantelMount.com or visit the MantelMount Kickstarter Campaign.

For the perfect view every time

Placing a TV above a fireplace moves the image you're trying to watch well above eye level. Cranking your neck into an unnatural position, day after day can cause neck pain and chronic headaches. And then there's the issue of glare unless you a flat screen TV from straight on. MantelMount allows you to avoid these situations, altogether. No matter where you're sitting/standing/laying/cheering in front of your TV, the positioning of the screen is yours for the taking.

MantelMount is the most premier over-the-fireplace, pull-down flat screen TV mount available on the market to date. Allowing up-and-down, tilt-and-swivel adjustability, MantelMount gives you the preferred view of your flat screen plasma, LED or LCD TV.

For more information on Mantel Mount or to pledge for the product, visit the website at www.MantelMount.com. 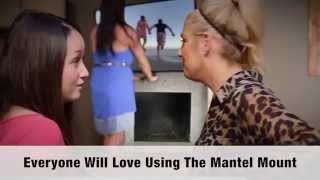