On Space Station, Earth's Beauty is in the Eye of the High Definition Beholder

The ongoing High Definition Earth Viewing investigation aboard the International Space Station allows anyone with internet access to continuously stream live views of Earth directly to their desktop or mobile internet device.

HOUSTON, TX, September 09, 2014 /24-7PressRelease/ -- A series of new Earth science instruments launching to the International Space Station over the next year is prompting a new era of Earth observation from the orbiting outpost. These new tools that monitor ocean winds and measure clouds and pollution in the atmosphere, among other climate science phenomena, will help NASA deliver important information to climate researchers.

While these new Earth science instruments collect valuable information on our changing planet, one current Earth observation study continuously streams live views of Earth directly to your desktop or mobile internet device. The High Definition Earth Viewing (HDEV) investigation allows anyone with an internet connection to view our world from above. Tune in to the HDEV live stream here.

The HDEV project employs four commercially available cameras to stream the first continuous, high definition video from the space station. During the two-year study period, researchers hope to determine the best types of cameras to use on future missions by subjecting them to the harsh space environment. The cameras are enclosed in a temperature-specific case and mounted outside the Columbus laboratory to monitor how quickly they degrade during exposure to radiation in microgravity.

"We know over time that the cameras will begin to degrade," said David Hornyak, engineer and HDEV project manager at NASA's Johnson Space Center in Houston. "We will operate the cameras to determine how long it takes and to learn what that degradation characteristic looks like to provide information on the planning and design of future imagery systems. It is expected that the cameras will not just turn off, but they will have some type of image degradation and at some point, that degradation will be bad enough that the image is no longer useful."

With the use of commercially available cameras, the research team also hopes to validate cameras that may be more cost-effective for future missions. If a camera is readily available on Earth and proves to hold up well in space, purchasing this type of camera would likely be cheaper than designing a new product.

By using four different types of cameras, each has a different type of technology to analyze for what works best in space. Once a week, the project team uses an automated software program to compare pixels on night imagery taken by the cameras to assess the deterioration of each camera. The pixels are easier to see and compare in dark images than in those with objects and multiple colors included.

"The project team is building up a database of knowledge for selecting cameras in the future," explained Hornyak. "With this information, we will have an understanding of how much time we have on orbit before a camera has to be replaced."

Another noteworthy feature of HDEV is that the High School Students United with NASA to Create Hardware (HUNCH) program participated in its development. HUNCH is an instructional partnership between NASA, high school and intermediate/middle school students to build cost-effective hardware and soft goods both for use on the space station and for training NASA astronauts and flight controllers. Students from the Clear Creek, Cypress Woods, Conroe and North Shore Senior High schools in the Houston, Texas area built much of the secondary structure that supports components of the HDEV flight system.

Though communication coverage between the space station and the ground is near-continuous, there are times when a loss of signal occurs and the communication from HDEV is temporarily unavailable. Observers may experience times of inaccessibility to the HDEV signal due to a change in communications satellites within range of the space station; when there is no line of sight between the station's antenna and the communications satellites, as when a satellite is over the horizon or blocked by a structure on the space station; or, during times of station, satellite or ground infrastructure maintenance. The HDEV site will display an image that the signal is down or display darkness when the station is on the night side of the Earth.

While these cameras and their resilience to the microgravity environment are put to the test, the public can benefit from this unprecedented, high definition view from space. "We did this so that everyone could experience the amazing views that the astronauts aboard the space station have when they look out from the Cupola at the Earth," said Hornyak.

Though it was not one of the main goals of the HDEV project, it is returning a high rate of participation by the public. In its first month of live-streaming video, 22 million viewers tuned in to watch HDEV. This project adds to a plethora of Earth observation missions in orbit, such as Cities at Night and EarthKAM. These ventures engage the public to become citizen scientists and inspire students to learn more about science, technology, engineering and mathematics (STEM). Another upcoming Earth science study, the International Space Station-Rapid Scatterometer (ISS-RapidScat), will monitor ocean winds from space. This information will be useful for weather forecasting and hurricane monitoring.

"We've always known that people are really excited and interested to see views of the Earth from space," said William Stefanov, associate program scientist for Earth observations for the space station. "To know that there is this human connection; this is a view that is not coming from a robotic satellite, it's actually coming from a spaceship that has people on it. I think that resonates with people." 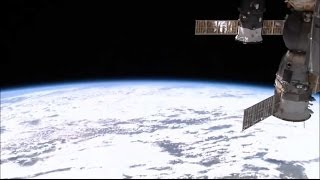 Four cameras sitting on the exterior of the space station stream live video of Earth for viewing online.