Move over turtles, make room for the rabbits.

SEATTLE, WA, September 16, 2014 /24-7PressRelease/ -- Move over turtles, make room for the rabbits. This film is called the Teenage Kung Fu Cottontails, created by... well let's just say most call him Hollywill. He's the driving force behind Jonz Journey Studios (http://www.jonzjourneystudios.org). He is the writer, producer, director and film editor behind this Sci-Fi fantasy film shot in the Great Northwest. It's a film about a mad scientist named Dow who made his way to China, seeking out a legendary, mystical Kung Fu Master named Fu Chi. After finding him, Dow took his super natural DNA back to the US where, in a lab he infused it into 5 female cottontails.

This caused the females to transform into 5 hybrid teenagers, each having a power from their forefather Fu Chi, played by Michael Landon. During the bunny stage, one sister named Psychedelica broke away from the clan causing many problems for her sisters and the Emerald City. This is a film of courage in the face of evil. The film was released today on DVD.

Hollywill, a U.S. Army Veteran is an author of a Sci-Fi book called Phleideis (A Pharaoh Story) and a producer of 2 other Indie films called Rantoon and Angelical Courts. On the 23rd of August 2014, Jonz Journey Studios hosted the premiere of the Teenage Kung Fu Cottontails at the Thelma Dewitty Theatre in West Seattle. Before the premiere, there was the Red Carpet evening with Limos arriving and photos being taken. After the premiere, there was the After Party with dancing and music, while Jonz Journey Studios' first film Rantoon was projected on the big screen.

The film has many Great Northwest local stars such as Melinda Raebyne, Emma Nguyen, Audra Page, Elke Hautala, Nyema Clark. There are supporting actors such as Raleigh Freeberg, Frank Briley and Jason "Davinchi" Samaritano. Frank Briley and Raleigh Freeberg are regular Jonz Journey Studios actors. The new comer Davinchi, is a local Rapper whose music made it all the way to the number 2 spot on Seattle's Reverb Nation chart. The Nemesis Techla is played by Kung Fu martial artist Aaron Arnold who is also a great swordsman. Stunts were provided by Jay Velasquez who is also great at martial arts and swords. 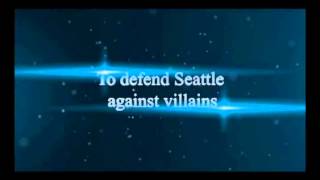 The Teenage Kung Fu Cottontails, a story of 5 rabbits turned into crime figting female hybrids to protect the Emerald City.