This important security conference will be held November 4-6, 2014 in Orlando FL. If you are involved in any aspect of public safety and Homeland Security you can't miss this event!

ORLANDO, FL, October 08, 2014 /24-7PressRelease/ -- Join over 250 US agencies, the Consulate General of Israel that serves Florida and Puerto Rico along with attendees from as far away as Norway and Nigeria.

The theme of this year's conference is "Better Tools to mitigate Terrorism and Violent Crime."

Some of the subjects to be covered by the over 10 speakers during the three day conference will include:

"If you take the recent activities of terrorist groups such as ISIS and combine it with the criminal activity in Mexico, add to this equation our easy to cross US borders, it is a recipe that tells me that the likelihood of terror attacks on our homeland has increased," says Sol Bradman CEO of Security Solutions International.

Some of the featured speakers at the conference will be:

Mike Roche retired from the U.S. Secret Service, after serving twenty-two years. He has published three works of fiction and a two non-fiction books, Face 2 Face: Observation, Interviewing and Rapport Building Skills: an ex-Secret Service Agents Guide on rapport building. His newest book is Mass Killers: How You Can Identify Workplace, School and Public Killers Before they Strike.

He will discuss the historical prospective, current trends and different types of targeted violence. The session will analyze the attacker profile, associated myths, motives, attack related behaviors, and mental illness factors. The attendees will learn investigative and management techniques that will enable first responders to recognize potential warning signs and effectively identify, investigate and mitigate the behavior of those individuals who may be considering school place, workplace or public violence.

Dr. Tanya Glenn - Personal and Professional Resilience: Are You Ready?

This workshop is designed to educate participants on personal aspects of resilience as well as professional readiness for catastrophic events. It will outline the most recent research on what makes an individual resilient and challenge students to improve their personal resilience. The workshop will also address workplace resilience by examining business cultures, attitudes and protocol for incident preparedness. An emphasis will be placed on implementing the right attitude and capabilities to manage a large scale incidents.

Dr. Tania Glenn is the president of Tania Glenn and Associates (TGA), PA a clinical practice with two offices in Austin, TX.

Peter has served as a subject matter expert on behavior analysis for the U.S. Army, Transportation Security Administration (TSA), Department of Homeland Security (DHS), and National Science Foundation. He has been a lecturer on terrorism related issues for the FBI, CIA, Secret Service, DHS, NYPD, and the Department of Defense Criminal Investigations Task Force. He has testified before the U.S. House of Representatives as an expert on behavior detection in homeland security applications. He holds a Juris Doctor from Western New England College School of Law.

Peter is also employed by the Boston University Police as a Detective Lieutenant where he commands the BU Police Detective Division. He served as a Massachusetts State Police officer for twenty-three years, retiring as a lieutenant in August 2010. He is also presently an attorney having been admitted to the bar since 1995.

Stephen Brooks is a division chief at the DHS

Trafficking in persons is a transnational crime with global implications. In order to combat trafficking and bring its perpetrators to justice, all nations must recognize that trafficking is a serious criminal offense. Politicians and law enforcement officials in all countries must give priority to the investigation and prosecution of trafficking in persons offenses, assign appropriate punishment to those found guilty, and protecting the victims of such offenses. All transit, receiving, and supply countries must cooperate in the prevention, investigation, and prosecution of human trafficking phenomena and offenses. Because the United States is a key destination country for trafficked victims, it has a special role to play in combating the problem and setting an example for other countries to follow. The nexus between the money made and terrorism is well documented.

Future threats to homeland security and defense will continue to originate in the hands of determined terrorists however the emergence of the 'strategic hybrid threat' which combines national, criminal and terrorist elements creates a unique opportunity for the eventual acquisition of new lethal technologies.

This new threat will have the resources necessary to execute sophisticated attacks without leaving identifying fingerprints. Just as we prepare for the onslaught of likely future attacks we must be ready for the unexpected as well. The growth of several major fields in advanced technology, together with their inherently dual use nature, means that several areas of research activity--genomics, robotics, neuroscience, cyber science--to name a few contain the potential for launching a new breed of weaponry in the period 2015-2030. Separately these areas of advanced science can pose risks but when deliberately combined they constitute new forms of WMD. The time to prepare for these threats is now rather than after their destructive introduction. Methods for defending against, neutralizing, and thwarting such new attacks are going to be critical to future security measures.

With a reputation forged by hard work and determination to empower Homeland Security warriors, Security Solutions International is proud to offer The Counter Terrorist Magazine.

The Counter Terrorist is the world's premier informational journal for law enforcement, intelligence and special operations professionals; our mission is to provide operators relevant information in order to combat terrorism at home and abroad.

See why The Counter Terrorist is already the favorite journal for many of your teammates. This magazine brings you writers with operational experience covering topics such as: 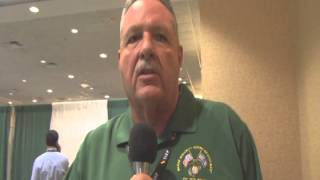