Move over Spider-man, Curly the pig is flying through the sky to demolish dangerous meteors, stop trouble and save the Big City

NEWARK, DE, April 28, 2015 /24-7PressRelease/ -- Today, Theta Apps announced the iOS launch of Curly, an addicting tilt and fast finger tapping game. Throughout this high-score based game, players take the role of Curly the pig and fly on ropes through the Big City to achieve the highest amount of points by dodging and destroying meteors while gaining special abilities. Although hard to believe, adult pigs can run at speeds of up to 11 miles per hour;* Curly the pig can fly twice as fast in this thrilling game.

"Curly provides players of all ages an escape from daily stresses and transfers them into an exciting new world, while keeping them literally on the edge of their seats with the easy-to-use tilt and tap combination gameplay Curly offers," said Theodore Papouloglou, President and Owner. "The average online game playing addict is around 35 years old, so forget about the adage that you can't teach an old dog, or pig, new tricks!"

In Curly, the main goal is for players to collect points and stay alive for as long as possible by avoiding the meteors and picking up everything else. As the game progresses, meteors will fall faster and fill the screen intensively, making it quite challenging to keep Curly alive. Yet the special abilities that appear during the game will prove to be life savers. Players can recover spiderwebs and shoot them at the meteors, but what will definitely come in handy is the Buzz soda-can and grenade. Players can use the Buzz soda-can to gain five seconds of invincibility to break through the meteors for points while grenades can blow up every meteor on the screen. The free version limits users to the shooting web ability while the pro version includes all other abilities. There is no age limit for Curly, this game is endless fun created for players of all ages.

About Curly
As Curly travels to the big city his journey takes an unexpected turn. Upon arrival, Curly notices that something isn't right and soon enough he spots the trouble coming straight at him. Suddenly, out of nowhere and while panic strikes him, a rope of hope was brought to his attention. Help Curly get out of this mess by dodging and destroying the meteors while gaining special abilities throughout the game.

About Theta Apps
Theta Apps is a U.S. based studio which was created in 2014 in order to develop entertaining games and innovative mobile applications for both iOS and Android platforms.
Website I Facebook I Twitter

Curly Theta Apps 2015 - All Rights Reserved. Apple, the Apple logo, iPhone, iPod and iPad are registered trademarks of Apple Inc. in the U.S. and/or other countries. 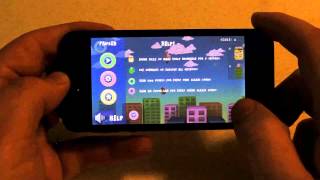