"Getting Moxie on this list has been a dream of mine for a long time. Being number one is more than I thought possible." -Jason Hall, CEO, Moxie Solar

CEDAR RAPIDS, IA, May 18, 2016 /24-7PressRelease/ -- Iowa solar installer Moxie Solar was recognized as the fastest growing company in Iowa's Creative Corridor by the Corridor Business Journal yesterday. Moxie Solar experienced a staggering 539% growth in revenues from 2013 through 2015, more than double that of the second place honoree.

The rankings included companies from a wide variety of industries, from veterinary services to architecture. The Corridor covers seven counties in eastern Iowa, home to thousands of businesses.

Accepting the award on behalf of Moxie Solar was Jason Hall, CEO. He had previously been on this stage a few times as part of another Corridor company. In his remarks, he pointed out that this felt very different, since he built this company from the ground up rather than joining on after it had been established. "Getting Moxie on this list has been a dream of mine for a long time. Being number one is more than I thought possible."

The appearance of Moxie Solar at the top of such a diverse list is a testament to both the continued growth of renewable energy in Iowa and the hard work of the company's employees.

Agricultural solar projects made up the majority of the company's revenues over the past 3 years. In addition to residential and commercial installations, municipal projects at the county and city levels are expected to make up a significant portion of the company's income this year. 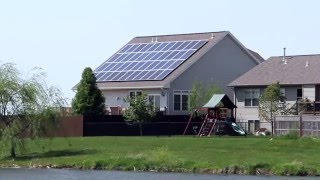