"My dad's spirit helped me prove to my own family members that he was at his own wake and funeral."

"Ghosts and Spirits" was Gutro's first book, originally published in 2010. It was the first paranormal book to distinguish the difference and similarities between Earth-bound ghosts and spirits who have crossed over into "Heaven, Valhalla, Paradise, etc." or whatever people call the other side.

"One of the most incredible stories in the book is about how my dad's spirit helped me prove to my own family members that he was at his own wake and funeral and around during the entire week of his services," Gutro said. "My dad's spirit also helped me find a number of things for my mother, who lived over 300 miles away."

The author, a medium, paranormal investigator, scientist and dog dad, provides proof that people and pets do communicate with us from the other side. He is a medium with Inspired Ghost Tracking of Md. He sketches out what ghosts look like who are haunting private homes and has received many confirmation from homeowners. He is also a parent to three dogs and is a volunteer with Dachshund and Weimaraner rescues.

"I wrote this book to provide some understanding of the difference between an Earth-bound entity and one who crossed over," Gutro said. Readers will learn about orbs, poltergeists, dark entities, the significance of ashes, what happens to murder and suicide victims, how to experience ghosts, how to cross them over, and more. He has learned that when it comes to spirits, there is no such thing as a coincidence. He cautions though that people should not jump to conclusions and think everything is a sign. "There has to be a personal meaning or connection," he said.

In "Ghosts and Spirits" readers will also learn how the author lived in a haunted house, how he experienced many ghosts in historic and other places.

Earlier in 2016 he published his fourth book, "Pets and the Afterlife 2," a follow up to Amazon's best-selling "Pets and the Afterlife," where readers will learn how dogs and cats have the intelligence and ability to send signs to the living after they pass. "Ghosts and Spirits" includes the author's first experience with pet communications thanks to his dog "Buzz" who passed and became "the world's best canine communicator." It was all of the communications from Buzz that inspired him to write his first book.

"I write these books to educate and give people understanding to recognize signs on their own," he said. He doesn't take appointments or do readings but people are always welcome to e-mail or Facebook him.

Rob maintains a weekly blog, Facebook and Twitter pages, where he writes about paranormal topics, and where people can share their stories or find other resources on the paranormal. The new book and his other books "Pets and the Afterlife," "Lessons Learned from Talking to the Dead" are available in paperback and E-book, on Amazon.com and other outlets at: http://tinyurl.com/hp92st7. Published by CreateSpace, Inc.

The author has been featured in the Washington Post, MSNBC, WBZ Newsradio Boston, "Coast to Coast AM" syndicated radio with George Noory, Paranormal TV's "Do You Believe," Paranormal Underground Magazine and U.S., U.K. and Ireland paranormal radio programs such as Unknown Paranormal Radio, Ghost Chronicles Radio, the Haunted Syndicate Pararadio Show and many others. See his website for other appearances and interviews.

Rob Gutro is an author, paranormal investigator and medium with Inspired Ghost Tracking of Maryland. Since he was a child he could receive messages from ghosts or spirits (who have crossed over). *He wrote the books "Pets and the Afterlife," "Pets and the Afterlife 2," "Ghosts and Spirits" and "Lessons Learned from Talking to the Dead" to teach others how ghosts and Spirits communicate with the living and to give proof of the afterlife. As a scientist, he also provides some scientific explanations about how energy is the baseline for the afterlife and the medium that entities use to communicate. His books are available on Amazon. 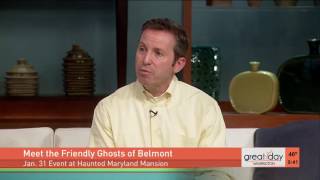